Melbourne colt Daily Bugle will keep progressing ahead of a Group 1 assignment in the rescheduled $1million Inglis Sires’ (1400m) at Randwick on April 10.

The Press Statement youngster earned a trip to Sydney following a resounding victory in the $125,000 Mornington Sires’ (1500m) on Saturday.  After tracking the pace, he powered home to win by over a length from Godolphin colts Alegron and Micro.

Daily Bugle (2c Press Statement – Hold Me Closer by Danehill Dancer) had won on debut at Pakenham in January but disappointed trainers Robbie Griffiths and Mathew De Kock with a lacklustre effort in the VRC Sires’ Gr.2 at Flemington on March 6.

“We were pretty despondent leaving Flemington last time,” De Kock admitted.  “But we’ve never given up believing in this horse.  You saw his ability today.  Now there’s an extra week to recover and we have the facilities here at Cranbourne to keep him ticking over.”

Daily Bugle was bred and sold by Tarcoola Stud owner Ken Williams for $230,000 at the 2020 Inglis Melbourne Premier Sale.  He’s a half-brother to Thought Of That who won the 2019 Caulfield Classic Gr.3 and they are from a half-sister to Golden Slipper Gr.1 runner-up How Funny.

“He’s always shown ability,” winning jockey Jamie Mott explained.  “But some wide barriers meant he’s been ridden negatively and it just hasn’t worked out.  We were within striking distance today and I was pretty confident we had them covered at the 600m mark.”

The Mornington Sires’ was the first-leg of a winning double for Vinery sire Press Statement on the peninsula.  His 3yo filly Incredulous Dream began fulfilling her potential with a first-up victory in the IDS Security Hcp (1200m) for trainers Ciaron Maher and David Eustace.

“She’s got a future and will come back a lovely type next year,” Maher predicted after a Caulfield win in October.  “We’ve always had a big opinion of this filly.”

Incredulous Dream lived up to that forecast on Saturday after being given the run of race by Jye McNeil.  Presented with a well-timed finish, she surged clear to score by a length as the drifting $4.80 favourite.

“She’s a high quality horse and has furnished from last prep,” Maher said.  “She’s grown up mentally and more so physically.  We will look at Adelaide but Brisbane might be better with a bit of sun on her back.  Those big tracks up there will also suit.”

Incredulous Dream (3f Press Statement – Incredulous by Keep The Faith) was the top-priced yearling by her sire when making $340,000 at the 2019 Gold Coast Magic Millions for a syndicate managed by Brad Spicer.  Bred by Aquis Farm, she is from a winning half-sister to Faith Hill (Emancipation Stakes Gr.2).  Second-dam Simply Believe (Kenmare) won stakes races at Moonee Valley and Morphettville.

In New Zealand, Press Statement filly Hold The Press was far from disgraced with a gallant fourth in the Wellington Guineas Gr.2 at Trentham. 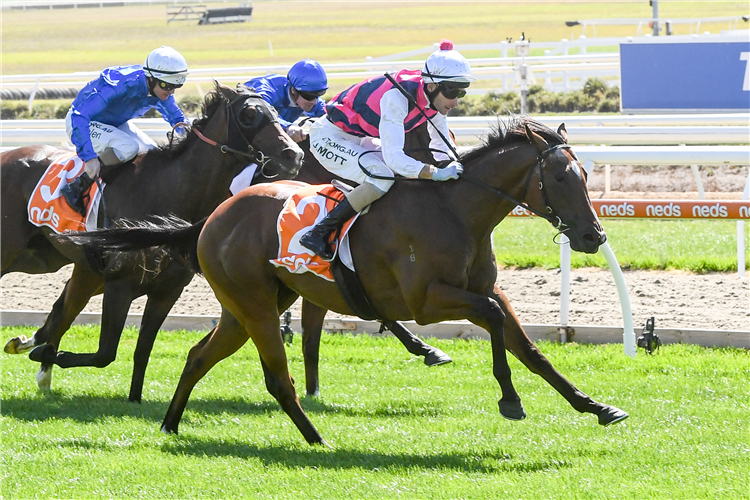