I’m All The Talk has zoomed into second spot on the WA Top 10 sires’ table following an interstate double in Melbourne and Perth on Saturday.

The Darling View sire banked a combined $157,000 thanks to promising winners All Banter (Moonee Valley) and Madam Torio (Ascot).  They helped him break seven-figures to $1.03m this season.  As always, Blackfriars is the benchmark on $1.35m.

All Banter was compared to a Group 1 sprinter by jockey Jamie Kah after their dashing two-length victory in the Seppelt Wines Hcp (1000m) at Moonee Valley.  The heavily-backed $2.30 favourite raced on the speed before bounding clear in the straight.

“She reminds me of Bella Vella,” Kah claimed on returning to scale.  “The feel she gave me just then was pretty special.”  Bella Vella is a Moonee Valley specialist winning the latest G2 McEwen Stakes and placing in the G1 Moir Stakes.

All Banter is trained by Richard and Chantelle Jolly and they bought her for $30,000 from Mungrup Stud at the 2019 Perth Magic Millions.  “She was always travelling terrific in the run and when Jamie let her go she really exploded,” Richard Jolly said.  “We had a hiccup with a chipped knee in her first prep but she’s a pretty cheap buy now.”

Jolly said All Banter will be rested ahead of the autumn with several suitable black-type options in Melbourne and Adelaide.  “It looks like she’s only going to get better.   Today showed she’s good enough to have a crack at three-year-old stakes races next time.”

All Banter was bred by Mungrup Stud from G3 SA Sires’ Produce Stakes winner Bantry Bay (Tale Of The Cat) who has also thrown four winners by Oratorio.  Her current 2yo is also a filly by I’m All The Talk.  Now named Daring Move, she was a $65,000 buy for Jolly in the Swan Valley earlier this year.”

“I’ve had a bit of luck at the yearling sales over there,” Jolly said. “All Banter showed ability from the outset so I went back and bought her sister.”

Madam Torio opened Ascot’s Group 1 meeting with a fleet-footed victory in the Tourism WA Trophy (1000m).  In a performance that paralleled All Banter, she mustered early speed and never lost control under Chris Parnham.

Trainer Martin Allan revealed she was underdone first-up from a 10-week break while Parnham said she was always travelling like a winner.  “Coming back to Ascot suits and the firm track helped,” he said.  “Her speed is a great asset and we will see in time if she gets out to 1200m.”

Like her Melbourne counterpart, Madam Torio was bred and sold by Mungrup for just $9,000 at the 2019 Perth Magic Millions.  “She presented with plenty of muscle at the sale and I decided to take a punt on I’m All The Talk,” Allen said after her maiden win in June. “The stallion is flying and I will go back for more, for sure.”

Her dam Sorbatorio (Oratorio) is an unraced half-sister to No Questions (G2 Karrakatta Plate) and French Favourite (LR Raconteur Stakes).  She has a yearling colt by Playing God and a filly foal by A Lot (USA).

I’m All The Talk (Stratum) stands for a $6,600 (inc GST) service fee at Darling View Thoroughbreds. 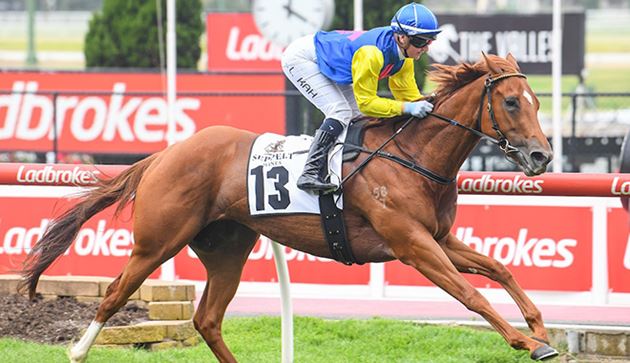