Vinery sire All Too Hard unearthed another 3yo with ability to burn when Dawn Dawn bolted in at Newcastle on Saturday.

The Team Hawkes-trained newcomer let down with a brilliant finishing burst to win the Huxley Hill Plate (1200m) from front-runner Wide Spread Panic.  She was spotting the leader a half-dozen lengths at the furlong but left her standing to score running away by two lengths.

“Sensational first-start win by Dawn Dawn,” Team Hawkes tweeted.  “Flying down the outside with Koby Jennings aboard.  Superb ride.”

The All Too Hard filly is a homebred for Rob & Pam Crosby who operate the award-winning Kansas Angus cattle stud in Boggabri.  They bought her dam Dawned (One Cool Cat) at a Patinack Farm dispersal for $45,000.

Dawned (NZ) had run fourth on debut in the 2008 Maribyrnong Plate-Gr.3 for Anthony Cummings and signed off with a Gold Coast win for John Thompson.  Bred by Sir Patrick Hogan, she is a half-sister to Beat The Fade (G2 Emancipation Stakes) and Dawn Till Dusk (G3 Cuddle Stakes).

Dawn Dawn is the 5th winner by All Too Hard with Team Hawkes following Darhad, Newburgh, Lakota and Groundbreak.

All Too Hard heads the Australian second-season winners (19) and wins (25) tables this season from Your Song and Pierro.  He was Australia’s Champion 3YO for Team Hawkes before retiring to Vinery where he stands for a $44,000 (inc gst) service fee. 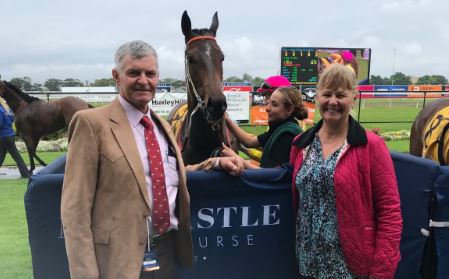