Magic Millions & Inglis Digital Sales have been a been a boon for West Australian stakeholders buying and/or selling general bloodstock.  Until now, their local on-site options have been restricted to Autumn and Winter Sales in the Swan Valley.

Bedfordale-based Balmoral Park was second on the leader-board for the Magic Millions August Online Sale when successfully bidding $82,500 for Arrowette (Not a Single Doubt).  Offered by Queensland nursery Kenmore Lodge, she was sold in foal to red-hot sire Capitalist.

South-west horseman Ross Price weighed in with $13,500 for Blackfriars mare Kensington Abbey who won 7 races up to 2200m in Perth for Arthur Mortimer.  Her Vert de Grece (Ire) yearling colt has been retained and she missed to Patronize last December.

Brown kept a share and Specialism went on to win three nurseries at Ascot as well as earning Group 3 black-type when a close runner up to Tinsnip in the 2019 WA Sires’ Produce Stakes.  She subsequently lost form with $370,000 already in the bank and was sold to Mogumber and Ridgeport Holdings principal Santo Guagliardo for $90,000 at the Inglis March (Early) Sale.

Specialism is a daughter of Mogumber Park sire Safeguard and found a new lease of life when flashing home to win at Morphettville on the last day of last season for new trainer Will Clarken.  She has been nominated to double up in the Grand Syndicates Hcp (1200m) this Saturday.

“We sent her to Victoria to freshen up with beach and bush work before going to Will,” Brown revealed.  “Now she’s just like her old self!  And we have her full-sister who is a beautiful yearling.”

Specialism’s renewed zest for racing has put retirement plans on hold.  Connections will wait for another run or two before deciding whether to keep her in work or be covered by G1 Golden Slipper winner Farnan at Kia Ora Stud.

Scenic Lodge purchased Zabeel mare Jewelled (NZ) for $20,000 at the Inglis May (Early) Sale when she was offered by Holbrook Thoroughbreds (as agent) for Peters Investments.  That looked good buying when the mare’s 4yo gelding Treasured Crown completed a winning hat-trick at Belmont on July 31.

Treasured Crown (So You Think) sports the cerise and white silks and will be gunning for a fourth win in a row at Belmont this Saturday.  He’s a half-brother to LR Ascot 1000 Guineas winner Adornment (Medaglia D’Oro).

Jewelled wasn’t served last year and she will be one of the early covers at Scenic Lodge in September. 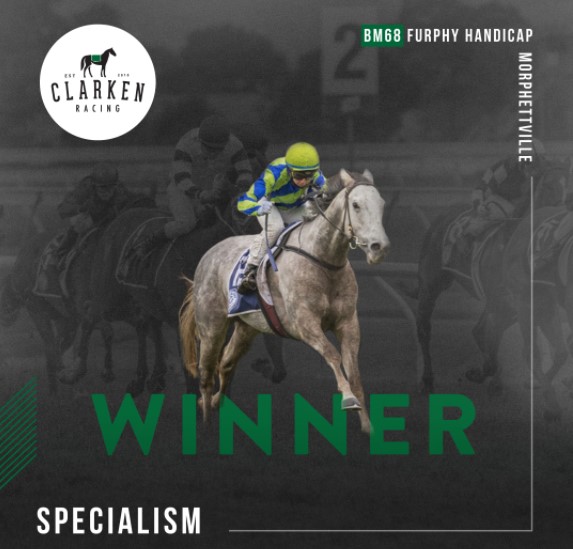