Laguna Girl took advantage of a lucky break from the barriers to lead home a Henny Hughes quinella in the LR Are We Dreamin Stakes (1200m) in New York.  She defeated odds-on favourite Merry Meadow by a half-length and they streeted third placed Vicki’s Dancer by four lengths.

Laguna Girl (3f Henny Hughes – Fashion House by Quiet American) lunged just as the gates opened at Aqueduct and quickly established an uncontested lead.  She maintained that advantage under jockey Manuel Franco to claim the $100,000 feature for fillies and mares.

Part-owned and trained by Joe Orseno, she was a $40,000 buy at the Fasig-Tipton Maryland 2YO Sale in May 2012.  Her dam Fashion House is a sister to Folk who won an Aqueduct maiden by 10 lengths for Sheikh Hamdan in November 2006.

Folk travelled to Dubai where she was a runaway winner of the 2007 UAE 1000 Guineas and UAE Oaks under Kerrin McEvoy.

Runner-up Merry Meadow (Henny Hughes) was going for a hat-trick on Friday after claiming a pair of allowance victories at Aqueduct.  She had finished second when making her black-type debut in the LR Dream Rush Stakes at Belmont in October.

The Henny Hughes winner-count kept growing on Saturday with 2yo colt Cherubim (Santa Anita) and 3yo filly Henny Girl (Calder).  And his Australian bred gelding Henny Fusaichi scored first-up after a six-month spell at Scone.

Laguna Girl is the 17th stakes winner for her sire and the latest black-type comes just a fortnight after Henny Hughes colt Asia Express won the Group 1 Asahi Hai Futurity Stakes in Japan.

Rangeview Stud sold Henny Hughes to Japan earlier this year and he will cover his first mares at the the Yushun Stallion Station in February. 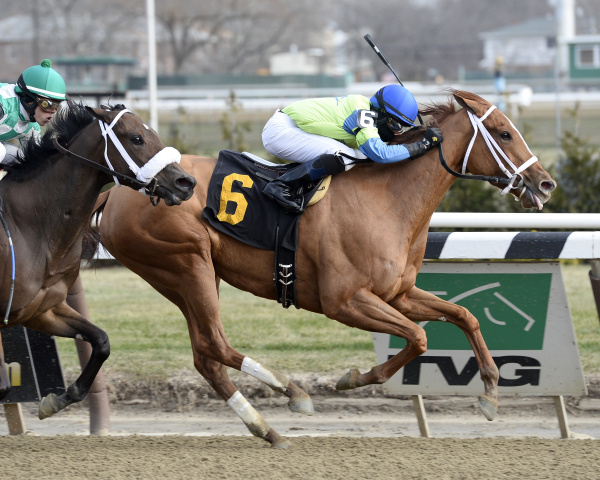