Vinery stallions are poised to play a hand in several of the supporting stakes races during the Group 1 meeting at Caulfield on Saturday.

It’s been two years since Vinery-sired mare Jameka claimed the Caulfield Cup and last year it was won by Lindsay Park longshot Boom Time.  Vinery isn’t represented in this year’s $5 million feature event but Lindsay Park will have another shot at the stumps with $26 hopeful Ventura Storm.

Co-trainer Tom Dabernig likes Ventura Storm’s chances at odds but labelled Testa Rossa mare Ellicazoom as one of the stable’s better bets in the Tristarc Stakes Gr.2.  In her last two starts at Caulfield, she has won the Cockram Stakes Gr.3 and finished a half-length second in the How Now Stakes Gr.3.

“Ellicazoom has been in excellent form and loves the track,” Dabernig said after Thursday morning trackwork at Euroa.  “I think she our best each-way chance on the day.”

Caulfield hosts 9 black-type events starting with the Gothic Stakes LR on Saturday.  More Than Ready’s Adelaide colt More Than Exceed can make his presence felt for trainer Phillip Stokes and Mossman gelding Crack Me Up can swoop home late for visiting Brisbane trainer Liam Birchley in the Moonga Stakes LR.

One of the most anticipated runs for a Vinery-sired horse this weekend will take place on Monday’s Labour Day public holiday in New Zealand.

Te Rapa is the venue where All Too Hard colt Dratini goes on trial for next month’s NZ 2000 Guineas (1600m) in the Sarten Memorial (1400m).  He fronts up for an introduction to black-type ranks following a slashing first-up victory in a Waverley maiden over 1200m a fortnight ago.

It’s huge step from a provincial maiden, to a stakes race and then into a Group 1 but trainer Fraser Auret is a believer.  “He’s a work in progress and is still learning what to do with all that ability.  He’s a magnificent type and is all of 500kg.  He never leaves an oat and I think he’s got the makings of a very good horse.”

Dratini (3c All Too Hard – Dorabella by Postponed) has drawn the rails for Lisa Allpress against a quality fields at set-weights in the Sarten Memorial.  It’s their final test for the NZ 2000 Guineas Gr.1 at Riccarton on November 10.

Earlier on Monday, All Too Hard has Copper Mine and Highfalutin Gal clashing in the Foster Construction Stakes (1200m) at Te Rapa.

Copper Mine is racing second-up following a Whangarei maiden win in June for trainer Catherine Cameron.  He’s attempting to qualify for a career in Hong Kong with Magus Equine.

Highfalutin Gal is a daughter of Randwick stakes winner Marquardt (Shamardal) and returns after a debut win at Waipukurau in March.  Owned by Greg Ingham’s GPI Racing, she was given an easy trial at Cambridge earlier this month and will have come on following a half-length second over 920m. 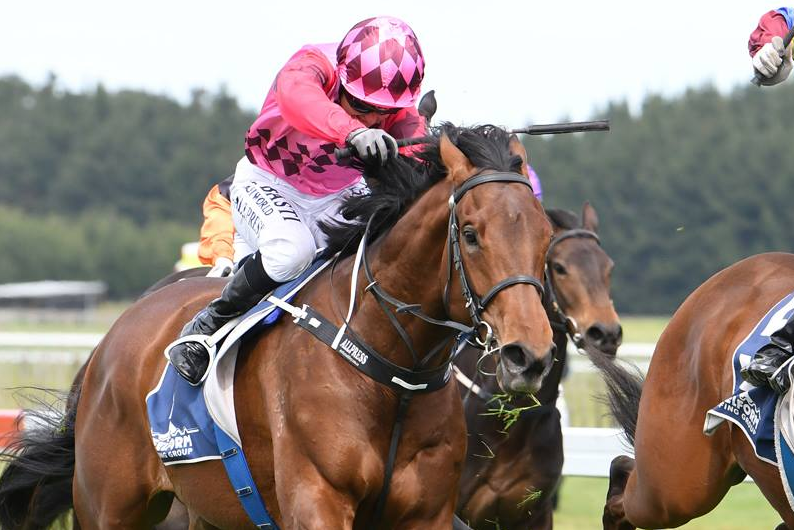