Vinery Stud has announced its explosive Group 1 winning sprinter Exceedance will join the roster and stand at a $38,500 service fee in 2020.

EXCEEDANCE (Exceed And Excel) scored a career-defining victory in the Coolmore Stud Stakes Gr.1 and is competitively priced for his first book at Vinery.

“Exceedance is an exciting addition to our roster this year,” Vinery General Manager Peter Orton said. “He has enormous potential at stud. Exceed And Excel is a terrific source of early speed and his female side has great depth. He is a beautiful looking horse and has that strong pedigree to back him up.”

The Team Hawkes trained Exceedance demonstrated his natural talent as a 2yo on debut with a spectacular last to first victory over 1100m. He was just as impressive second-up when just failing to catch Splintex at Rosehill despite clocking an amazing 32.21s for the final 600m.

That blistering turn of foot was palpable when Exceedance returned this season for a devastating first-up victory over boom colt Bivouac in the San Domenico Stakes Gr.3. He followed up with more amazing sectionals when flashing home late for placings in the Run To The Rose Gr.2 and Golden Rose Gr.1.

The stage was then set for the Coolmore Stud Stakes and Exceedance fulfilled his potential in the straight-six championship at Flemington. Although he was checked at the start, jockey Dwayne Dunn said “he travelled up nicely and I knew what was under the bonnet. He’s got a great attitude and can really accelerate.”

The Coolmore Stud Stakes is a grand final for colts and has launched the stud careers of Zoustar, Merchant Navy, Brazen Beau, Star Witness and Northern Meteor in recent years.

ALL TOO HARD remains at $27,500 despite moving into the Australian Top 5 for Stakes winners and Stakes wins this season with just four crops racing.

As a Top 10 active sire by earnings, winners and wins as well, he is, without exception, the best value sire in the Hunter Valley.

Alligator Blood has taken his connections and All Too Hard on a Group 1 journey this season that climaxed in the Australian Guineas (1600m) and there’s a range of options in the spring.

“We’ve had a lot of confidence in All Too Hard and we’re definitely seeing those results on the track,” Orton said. “He has always had nice-sized crops coming through and this season alone he’s high up on the stallion lists for individual Stakes winners, including two juvenile Stakes winners, and total number of Stakes races won.”

Despite the great success this year, his fee will remain unchanged as it represents terrific value for breeders looking for a proven stallion to take their resulting produce to the sales. All Too Hard had a great year in the sale ring and at the majors he had a clearance rate of over 96% and an average of almost five times his service fee.

STAR TURN’s first crop yearlings arrived with a bang and they achieved over 10 times covering fee at the Magic Millions. He had 14 yearlings sell for six-figures in 2020 and they were targeted by our leading trainers, including his top priced colt selling for $550,000 to the bid of Team Hawkes.

“We have been thrilled with how the stock of Star Turn were received at the sales this year,” Orton added. “The colt John Hawkes purchased on the Gold Coast is a testament to the type of horse he’s producing; they’re very forward and athletic, which isn’t surprising since Star Turn was such a standout yearling himself.”

Star Turn won in November of his juvenile season before returning to defeat Golden Slipper winner Capitalist in the San Domenico Stakes Gr.3. Sent to Melbourne for the spring carnival, he showed another brilliant burst of acceleration to defeat older horses at weight-for-age in the Schillaci Stakes Gr.2.

PRESS STATEMENT was the only colt of his generation to win a Group 1 at two and three and he’s on track for a Group 1 stud career.

Chris Waller trained Press Statement to complete the J J Atkins Stakes – Caulfield Guineas double and they have a front-line chance in this year’s first leg with promising colt and dual-city winner Spokesman.

“Press Statement didn’t start racing until April of his juvenile season and he finished that first season as an undefeated Group 1 winner,” Orton continued. “We are now starting to see some talented stock of his following the same pattern and we expect them to really hit their straps when they turn three.”

Ciaron Maher & David Eustace also train his first-crop winners Incredulous Dream and Major Murphy while John O’Shea has the promising filly Newsreader, who will be set for the Woodlands Stakes LR at Rosehill later this month.

HEADWATER has a potent pedigree, combining Champion sire Exceed And Excel and Oakleigh Plate Gr.1 winner River Dove. As a 2yo Headwater won a Silver Slipper Gr.2 at Rosehill so it’s not surprising that he has precocious first-crop winners like Wisdom of Water, Aquagirl and Mileva.

“Headwater has started his career off very well and already has what looks like a topliner in Wisdom Of Water,” Orton said. “When you consider he has more juvenile winners than some of the higher priced stallions around the country you have to think the future for him is bright.”

Wisdom of Water is a flying machine and was an unlucky fourth in the $2million Magic Millions Classic RL in January. He returned recently with an impressive five length victory and is on a path to the Gr.1 J J Atkins Stakes.

CASINO PRINCE is the perfect stallion for breeders wanting to retain to race and you won’t get any arguments at a $5,500 fee.

All Too Hard was one of two Group 1 winners from his first crop and there could be another at the Brisbane winter carnival if Baccarat Baby takes her place in the Stradbroke Hcp (1400m) at Eagle Farm on June 6.

Casino Prince is a prolific winner-getter and he props up the Vinery roster with career stats of 360 individual winners an incredible 71% strike-rate. 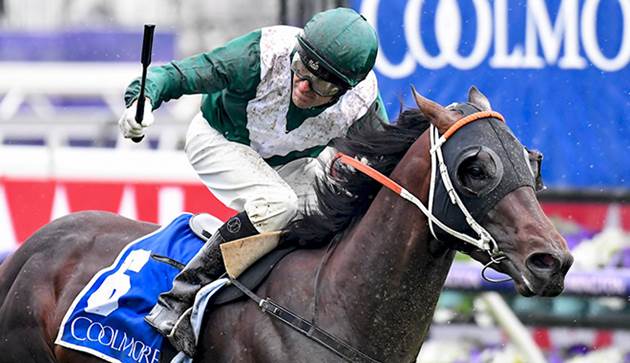