James Cummings was tempted to add Exhilarates to Godolphin’s Group 1 team in the Moir Stakes (1000m) on Friday before deciding she was better off against her own age group for the opening night meeting of the season at Moonee Valley.

Exhilarates would have carried 50kg for the $1 million weight-for-age sprint but appears better placed with 56kg at set weights in the Scarborough Stakes Gr.3 over 1200m.

The Vinery graduate has dominated Melbourne’s 3yo fillies at her last two starts in black-type events at Caulfield and Moonee Valley.  “There’s something to be said for keeping her in that company,” Cummings said after watching her gallop at Moonee Valley on Monday.  “She can keep winning and that will keep her confidence high.”

Exhilarates has been installed a $3 favourite and More Than Ready filly Ready Set Sail is priced at $21 for co-trainer Mick Price.  A Group 3 winner of the Thoroughbreds Breeders Stakes at Flemington in March, she is racing first-up ahead of longer assignments deeper into the spring carnivals.

Vinery colt Exceedance and Godolphin colt Bivouac head an all-star cast for the $1 million Golden Rose Gr.1 at Rosehill on Saturday.  The 3yo sons of Exceed And Excel are one apiece after their prelims in the San Domenico Stakes Gr.3 and Run To The Rose Gr.2.

“Exceedance did everything right in his work on Tuesday morning,” co-trainer Michael Hawkes said.  “He ran some really good sectionals in the Run To The Rose and is looking for 1400m.”

All eyes will be on Testa Rossa mare Enticing Star in the Golden Pendant Gr.2 at Rosehill following the sparkling Sydney debut of her stablemate Acadia Queen a fortnight ago.

They race for Perth-based breeders Bob and Sandra Peters and both mares are being set for the $14 million The Everest on October 19.  “Enticing Star has had almost an identical preparation to Arcadia Queen,” trainer Chris Waller reported this week.  “She’s a very good horse in her own right but there’s improvement to come as she is still carrying a bit of extra weight.”

Peters Investments bred Enticing Star by using Vinery sire Testa Rossa over his Perth stakes performer Favourite Star (More Than Ready).  Unbeaten in her first 8 starts, she has been off the scene since flying home behind Voodoo Lad in the Winterbottom Stakes Gr.1 at Ascot last December.

Rhaegar is another Vinery-sired visitor heading to Rosehill with designs on a feature race at Randwick next month.  A NZ-based son of Pluck (USA), he will appreciate the step-up to 1800m in the Gloaming Stakes Gr.3 after a first-up fourth in the Ming Dynasty Quality Gr.3 over 1400m in August.

“It will be a month between runs and we don’t want a heavy track,” co-trainer Andrew Forsman said.  “But we’re really happy with his progress and he will head to the (G1) Spring Champion Stakes if he measures up in the Gloaming.”

Alligator Blood will climax another successful weekend for Vinery if he retains an unbeaten record in the Caulfield Guineas Prelude Gr.3 on Sunday.  The 3yo son of All Too Hard has opened a $6.50 second favourite behind Dalasan ($3).

Trainer David Vandyke took Alligator Blood to Caulfield for a three-quarter pace gallop over 1000m on Tuesday.  “He seemed a bit lost so I certainly wouldn’t want to be coming here on Sunday for the first time,” Vandyke admitted.  “We’re under no illusion.  It’s a big step up and Caulfield can be a tricky track but he certainly deserves his place in the field.

“He’s taken all before him back home in Brisbane.  He continually sneaks under the radar and I don’t know where the ceiling is at this stage.”

All Too Hard gelding All Too Royal returns home to Caulfield for the Testa Rossa Stakes LR after a stint in Sydney.  At his most recent run in Victoria last November, the Vinery homebred won as an odds-on favourite at Mornington.

All Too Royal also won first-up at Randwick in August but resented the conditions when unplaced at Rosehill a fortnight ago.  Apprentice Robbie Dolan reported he was slow to begin and didn’t stretch out when travelling through a section of the track that had become worn through the day’s racing.” 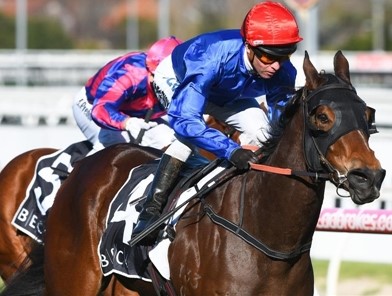