Winners by Vinery sire All Too Hard have been an All Too Familiar sight this season and a filly by that name saluted at Gundagai on Friday.

All Too Familiar (pictured with part-owner Julianne Horsman) opened the Snake Gully Cup meeting with a well-timed victory under apprentice Carly Frater-Hill.  She got mobile on the corner and motored down the outside after giving the leaders a big start in the Wiley Maiden Hcp (1180m). 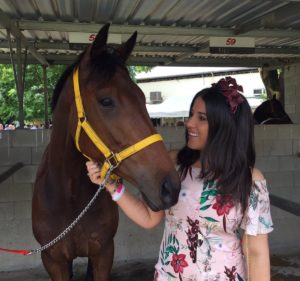 The Barb Joseph & Paul Jones trained filly started at $31 but belied that price to win running away by a length on debut.  “We haven’t pushed her so she’s obviously a nice filly to do that first-up,” Jones admitted.  “She didn’t do much in a trial at the Sapphire Coast earlier this month but, to be fair, she was up against open-class horses.

“We bought her at the Inglis Easter Yearling Sale.  She looked a nice walker but we knew she would need time.  A lot of the part-owners are in her after winning shares in a charity auction.”

All Too Familiar (3f All Too Hard – Maybe I by Red Ransom) is the first winner for a Gai Waterhouse trained mare who won on debut at Canterbury and was later stakes-placed at Rosehill, Newcastle and Randwick.  “I like her and she will only get better,” Frater-Hill said. “We slotted in but there was a bit of traffic on the turn so I swung wide and she did the rest.”

All Too Hard has sired 22 individual winners to top the second-season table this season.  He’s also sired two stakes horses from just two starters at the Melbourne spring carnival and promising colt Villermont can make it three in the Sandown Guineas-Gr.2 on Saturday.