All Too Hard delivered a one-two punch with his classic-bound colts Demonetization and Villermont on Saturday.

Vinery Stud’s star second-season sire has Demonetization heading for the NZ Derby-Gr.1 in March after keeping his unbeaten record intact at Tauranga.  And Villermont will go for a summer spell as one of the favourites for the Australian Derby-Gr.1 in April after a last-to-first victory in the Sandown Guineas-Gr.2.

“He’s all class,” winning jockey Luke Nolen claimed after powering home aboard Villermont.  “He should have won at Caulfield last time so we freshened him up and started again.  He’s got a nice turn of foot and this win will help his confidence.”

Villermont is a Vinery homebred and among his owners is Neil Werrett who was also in Nolen’s all-time favourite Black Caviar.  He was stuck like glue to the wonder mare and won’t be getting off the Sandown Guineas winner any time soon, either.

Trainer Aaron Purcell said the plan was to let Villermont settle at the back of the field but admitted there were some anxious moments when he was briefly pocketed at the top of the straight.  “He’s been working like a machine at home and was very strong late today.  Vinery entrusted us with a well-bred colt and we’ve delivered.

“He’s been deliberately restricted to a light spring prep because he’s definitely going to be better in the autumn.”

All Too Hard sired his latest stakes-winner from 2003 Coolmore Classic-Gr.1 heroine Bollinger.  She was sent to Kentucky and foaled Friesan Fire (Louisiana Derby-Gr.2) before being repatriated to Australia in 2010.

Another All Too Hard being set for the Australia Derby-Gr.1 is All Too Huiying who was sent for a spell after winning the Connoisseur Stakes-LR at Flemington on November 9.

Across the Tasman, Demonetization sprinted from the half-mile and still ran through the line in the Fertco Stakes (1400m) at Tauranga.  He’s held in high regard by trainer Nigel Tiley and will continue on the classic trail in the Trevor Eagle Memorial-LR (1500m) at Ellerslie on December 2. 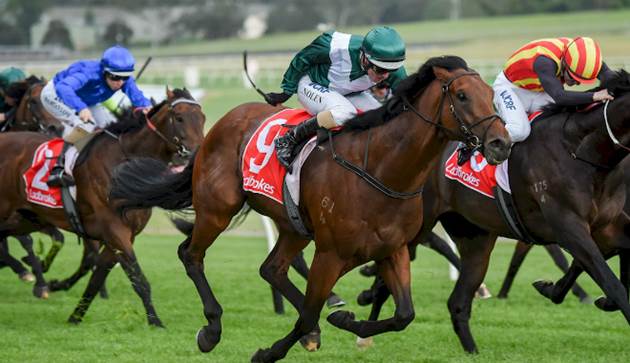