The FBAA suffix appeared 6 times in the Top 10 leader-board on Tuesday and Wednesday.

Inglis was a founding member of FBAA in 1988 and all our members, like every other industry participant, have fond memories of the Newmarket sale grounds. 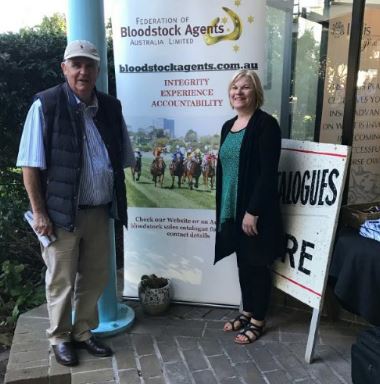 Aquis Farm and Blue Sky Bloodstock (FBAA) topped the bloodstock section with a sale-topping $500,000 bid for 3yo filly Our Girl Raquie (Fastnet Rock) who is out of a three-quarter sister to Redoute’s Choice.

They combined for 21 broodmares totalling $2.30 million and heading their other buys were Bound To Blush (Strategic) and Serein (Postponed) for $200,000.

“We managed to pick up some lovely mares but it was tinged with some sadness as it was the last selling day at Newmarket,” Blue Sky’s Julian Blaxland said.  “I’ve been coming here since I was 15 and it was sad to see the last horse sold under the famous fig tree.

“It’s a good market at the moment and there’s the Gold Coast Magic Millions coming up.  Aquis is hopeful of acquiring some more mares before the start of the new season.”

Damon Gabbedy’s Belmont Bloodstock (FBAA) paid $250,000 for Title Holder (Magic Albert) who was sold with a positive to Written Tycoon.  “She’s been purchased for Yarraman Park and will be covered by I Am Invincible in 2017,” Gabbedy said.  “She’s a glamour mare and it’s a bonus being in foal to a red-hot stallion.”

Gooree Park sold Mixed Emotions (Testa Rossa) to Randwick Bloodstock Agency (FBAA) and Lustre Lodge for $155,000 in foal to Hallowed Crown (Street Sense).  She is from a half-sister to Northern Meteor.

RBA principal Brett Howard said Mixed Emotions had been purchased for Glen Spratt and David Bishop of Lustre Lodge on the NSW Central Coast.  “It was one of those rare opportunities to buy into a nice young mare in foal to a legitimate Group 1 stallion.”

Peter Ford Thoroughbreds (FBAA) topped the Inglis Foal session with $160,000 for a Dissident colt on Monday.  He returned for four mares headed Tales of Lilakyn (Tale of the Cat) who was sold in foal to Pierro for $100,000.

Sheamus Mills Bloodstock (FBAA) bought three mares with Curl Up (Zizou) topping the list at $80,000.  A winning daughter of Sky Cuddle (G1 Oakleigh Plate), she was purchased in foal to Star Witness on behalf of Palya Bloodstock