Mongolian Wolf and his sire Pluck (USA) are on track for a Group 1 at the Brisbane winter carnival following an outstanding victory in the Group 3 Frank Packer Plate (2000m) at Randwick.

The Kiwi import had classic form at home and that potential shone through when he won first-up in Australia on Saturday.  “I’ve only had him a fortnight,” trainer Darren Weir said.  “Brenton (Avdulla) got him into a lovely spot, it was a great ride.”

Mongolian Wolf was bred in Australia by Peter Arvanitis using Vinery sire Pluck over Oomaroo (Tale Of The Cat) and his value has increased exponentially since Arvanitis sold him as a foal to Tas Rielley of Basinghall Farm.

Basinghall pin-hooked him for a profit as a yearling and Regal Farm did even better selling him for $200,000 at the 2015 Karaka 2YO Sale.

Rider Horse Group placed him with champion trainers Murray Baker & Andrew Forsman and his value kept increasing with a first-up win at Arawa Park and an even better barnstorming victory over older horses at Pukekohe.

Mongolian Wolf then filled out a Group 2 trifecta behind Gingernuts and Charles Road in the Avondale Guineas.  He’s the third 3yo son of Pluck to leave Baker & Forsman this year after the recent sales of stablemates Gasoline and Pluck That to Hong Kong.

Weir was quick to credit Australian Bloodstock managers Luke Murrell and Jamie Lovett for earmarking and buying the promising stayer from across the Tasman.  “They pick the right horses and they’re getting the rewards.  They said he will be a great horse for the Queensland Derby.  The way he won today you would have to say he’s on track for that.”

The G1 Queensland Derby (2400m), worth $600,000, is scheduled for June 10 at Eagle Farm.  “The NZ three year-olds have been very, very good this season,” Lovett said.  “Mongolian Wolf is still six months away and could mature for the Caulfield Cup.”

Pluck (More Than Ready) has already sired G3 Maribyrnong Plate winner Aspect this season and Vinery will stand him for a $9,900 (inc gst) fee this year.

His first-crop sprinter Removal is another Victorian heading in the right direction.  The Nick Ryan-trained colt was an easy winner at Ballarat on Wednesday following earlier strikes at Swan Hill and Yarra Valley.

Pluck got him from Enemy Dragline (General Nediym) and he was a $55,000 buy for owner Lauren Cameron at the 2015 Magic Millions National Sale.

“Removal has always shown ability, so it was good to see him put it all together,” Ryan said this week.  “We will see how he pulls up but there’s a race for him at the Warrnambool carnival next month.” 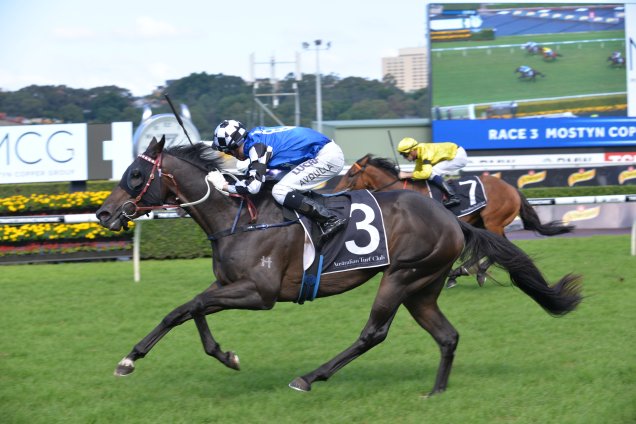