The Phillip Stokes-trainer gelding was racing first-up in an 1100m maiden after failing on debut in August.  “He’s a beautiful big horse and still has a lot to learn,” in-form jockey Jamie Kah said.  “They took off too soon and I got a good trail into the race.  He only knuckled down in the last 100m and is definitely looking for more ground.”

He’s a half-brother to Thunder Fantasy who won a G2 Autumn Stakes at Caulfield for Anthony Cummings and a LR Classic Cup at Sha Tin, defeating Redkirk Warrior, for John Size.

“Thomas picked the pedigree and I did the inspection,” Stokes said at Karaka.  “I liked the look of him and then did a bit of research on Tartan Bearer – he was a good staying horse.”

Eclair Calling is from Tartan Bearer’s first crop conceived at Hallmark Stud in NZ.  His first winner arrived in Macau on March 3 when Eclair Infinity was successful for the Golden Friend Club.

Tartan Bearer (Spectrum) was trained by Michael Stoute for Ballymacoll Stud and won the G2 Dante Stakes before finishing a half-length second to New Approach in the 2008 English Derby.

A full-brother to G1 English 2000 Guineas winner Golan, he was bound for a stud career in Libya and then Turkey but both deals fell through.  He stood at Hallmark Stud for four years from 2012 until December 2015. 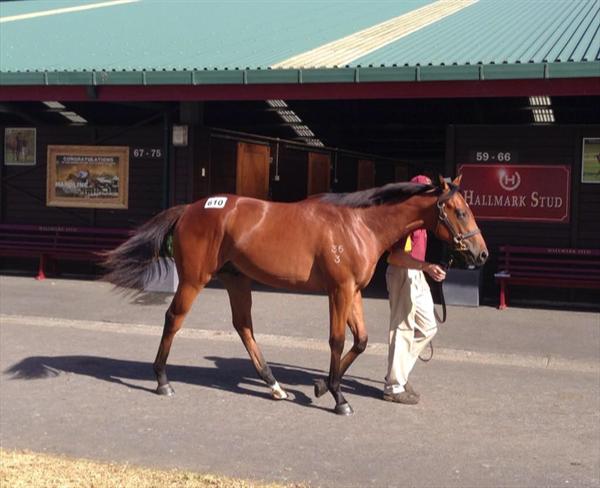