Exciting 2yo filly Gongs became the first southern-hemisphere winner for Darley sire Dawn Approach with a dominant display on debut at Canterbury on Wednesday.

Gongs broke smartly and was sent straight to the front by Brenton Avdulla.  She dictated throughout the 1100m nursery to win by more than five lengths.

Trainer James Cummings was very impressed with the Godolphin homebred.  “It’s lovely to see a two year-old with that sort of speed from the gate, she was in a different post code,” he said.  “It’s good for her sire Dawn Approach and we can now look for a nice race for her next year.” 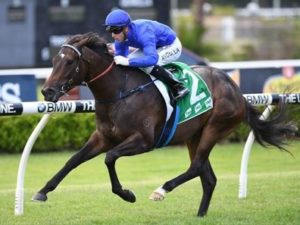 Gongs (pictured) is a half-sister to stakes-placed Mesa and is the fifth winner from five foals to race out of Bel Esprit mare Belcentra (LR VRC Desirable Stakes).

Cummings said Gongs had clearly improved since winning her only barrier trial at Canterbury in November.  “There’s not doubt she’s really improved a furlong since then.  She’s been able to absorb some really good, strong training.”

Avdulla rode Gongs in her trial and also noted her progression after dropping the defeated division led by Granny Red Shoes.  “I galloped her on Saturday and I thought she took the necessary improvement,” Avdulla said.  “She’s nowhere near where she’s going to be.  She just wasn’t 100% sure how to come off the bridle but her best work was her last furlong.”

Dawn Approach (Ire) shuttles from Kildangan Stud in Ireland to Darley Kelvinside NSW where he stands for a $22,000 fee.  There have been 13 winners from his first northern hemisphere crop, including four stakes performers led by Mary Tudor and Dawn Delivers.

He returned the following season in even more impressive fashion when trouncing his rivals by a full five lengths in the G1 English 2000 Guineas at Newmarket.  After an unsuccessful tilt at the English Derby, he made one of racing’s greatest comebacks only 17 days later.

In a dramatic finish at Royal Ascot, Dawn Approach refused to surrender when tackled by Toronado in an epic duel befitting the time-honoured G1 St James’s Palace Stakes.