Power Alert (5g Alert – Gold Locket by Lochrae) was a homebred for Jim and Alba Power and won four races in Australia – including the 2013 Wellington Boot – before bleeding for a second time at Albury in March 2014.

Barred for life back home, he transferred to Florida and won an allowance at Gulfstream on December 21 before stepping straight up to black-type company with a last-to-first victory in the Silks Run.

“He’s a very fast horse,” owner-trainer Brian Lynch said after his grey flyer was timed at 55.80s for 1000 metres on turf.  “He’s an easy horse to train and is just pretty straightforward.

“My brother works in Australia and recommended Power Alert,” Lynch said.  “He’s a track superintendent down there and watched the horse train each day.  They thought it would be better to get him over here on some Lasix and see if that didn’t help.”

Power Alert will now be set for the G3 Shakertown Stakes at Keeneland on April 4 and G3 Twin Spires Turf Sprint at Churchill Downs on Kentucky Oaks day.

Alert was a Group 1 winning 2YO of the GP Estrellas Juniors Sprint in Beunos Aires clocking 55.20s for 1000m.  He is by More Than Ready’s sire Southern Halo and stands for a $5,500 (inc gst) fee at Kooringal Stud in Wagga. 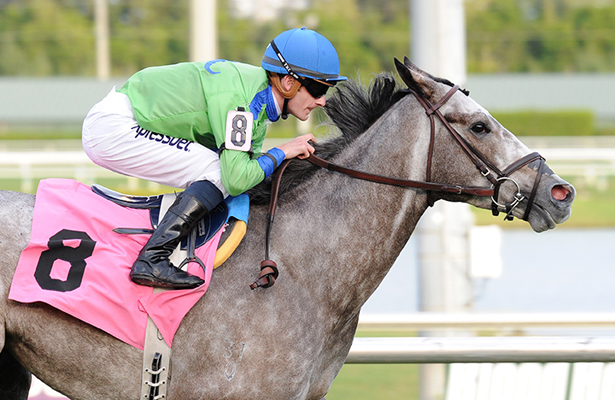