Explosive sprinter Maschino has unearthed a talented filly out of his first crop in Perth.

The Alwyn Park freshman sired his first winner when Fabergino scored a commanding victory at Ascot on Saturday.  She jumped straight to the front on debut and accelerated to a winning lead at the top of the straight.

“She’s been a bit difficult to handle but her manners are improving,” trainer Tiarnna Robertson said.  “She goes hard and we will stick to these 1000m races for now.”

Winning jockey Jarrad Noske returned to scale short of breath after taking a half lap to pull up the winner.  “She’s raw but exciting.  She mustered speed, pricked her ears and enjoyed it out in front.”

Fabergino is from Miss Razyana who won her first two starts at Canterbury for Gai Waterhouse.  Bloodstock agent Michael Flannery purchased her for $36,000 on behalf of Sunspeed breeder Jim Anderson at the 2013 Magic Millions National Sale.

Four years earlier, Flannery and Anderson combined to buy Maschino for $240,000 at the 2009 Inglis Easter yearling sale.  A son of Australian champion Encosta de Lago, he is from a three-quarter sister to leading Queensland stallion Hidden Dragon.

Renowned for his whirlwind finishes, Maschino won 7 races highlighted by a Group 3 victory in the R J Peters Stakes (1500m).  He was also placed in the G3 Asian Beau Stakes and LR Northerly Stakes before a tendon injury drew the curtain on a career that spanned 22 starts.

Anderson stands Maschino in association with Alwyn Park studmaster John Andrew at Serpentine in WA.  His only other starter to date has been Infinite Beauty who finished midfield first-up at Ascot last month. 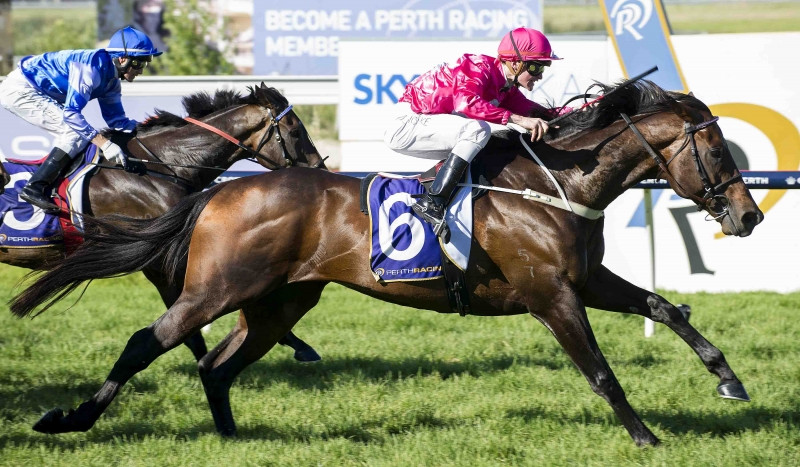