The early-season spotlight on Australia’s new 2yo crop moves to Melbourne on Wednesday for the VRC Spring Preview Stakes (900m) at Flemington.

Vinery stallions More Than Ready (USA) and Headwater were prominent at the Sydney barrier trials on Monday and fellow Vinery sire All Too Hard can win tomorrow’s first 2yo race of the season with Difficult.

Difficult has opened a $3.60 favourite on the strength of a three-length trial win at Cranbourne earlier this month.  The John Maloney-trained youngster is a homebred for John Shannon and is bred to go early being a half-sister to Sandown juvenile winner Stingray.

Melbourne syndicator Wylie Dalziel will also be following the performance of second-favourite Cut It Out in the straight-course dash.  She defeated his Headwater filly Aquagirl in a Cranbourne trial last Tuesday but trainer Phillip Stokes elected to spell Aquagirl instead of going directly to Flemington.

“We bought her at the Gold Coast Magic Millions and Luke (Nolen) reckoned she was forward enough to go to the races,” Dalziel relayed on Monday.  “But we thought it best to give her a break and bulk up with some spring sunshine on her back.

“We have a good opinion of Aquagirl.  That Cranbourne trial was run on a Heavy 10 and Luke said she’s a sensible filly and is already there mentally.  We will bring her back and aim for the stars after Christmas.”

Headwater had three trialists at Randwick on Monday – Mr Colorful, Ashra Jahre and Lamelo – and the trio were all placed after showing speed in their heats.

Mr Colorful was bloused out a nose and a nose for trainer Gary Moore.  He was a $100,000 buy at the Gold Coast Magic Millions and is the first foal of a Randwick winner Holder Sunset (Shamardal).

Ashra Jahre was in front at the furlong and wasn’t pushed out by Josh Parr in the second fastest of the 11 trials.  She is a half-sister to Randwick 2yo winner Miss Amajardan and was an $80,000 buy for Darby Racing at the Inglis Classic Sale.

Lamelo raced wide with a high head-carriage and there’s plenty of room for improvement after his second to More Than Ready colt Global Quest.  He’s from a winning half-sister to Wakeful Stakes Gr.2 winner Tiamo Grace.

Global Quest is trained by Chris Waller for Aquis Farm and Highgrove Stud and looks a readymade prospect for the Breeders’ Plate Gr.3 at Randwick on October 5.  He cost $340,000 out of the Gold Coast Magic Millions in January.

“We only gave him a jump-out at Rosehill before today so he’s still green and is only going to improve,” stable manager Charlie Duckworth said.  “He’s sharp and natural with a good clean action and he’s got a brain, too, which is obviously a massive help.”

More Than Ready sired him from Global Dream (Fastnet Rock) who was fourth in the 2013 Magic Millions 2yo Classic RL won by Real Surreal. 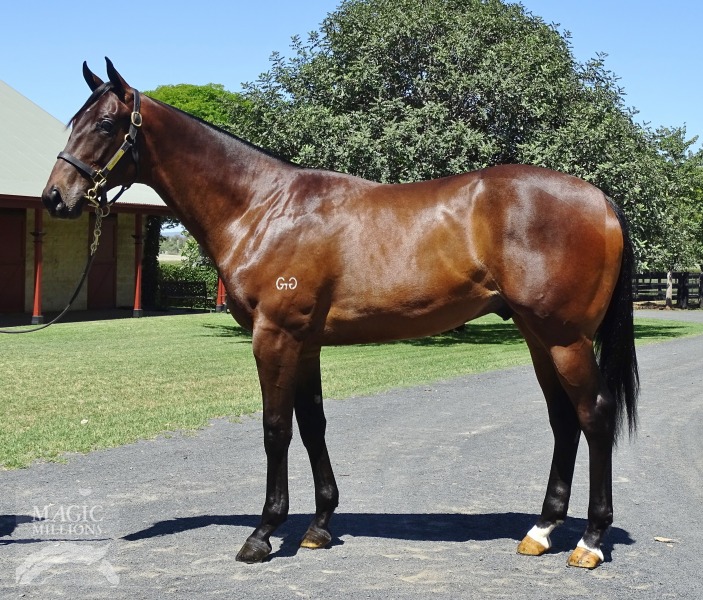