More Than Ready colt Evacuation has firmed sharply in pre-post betting for the G1 Caulfield Guineas following a first-up victory at Rosehill.

The TAB promoted the Gai Waterhouse trainee into a $9 second-favourite behind Sacred Elixir ($8) for the stallion-making classic on October 8.  Fellow More Than Ready colt Prized Icon is on the fifth line at $15.

Evacuation (3c More Than Ready – Scattered by Tale Of The Cat) had won on debut at Kembla Grange in April and maintained his unbeaten record with an on-pace success in the St Mary’s RSL Hcp (1400m) on Saturday.

“We will get him down to Melbourne – the Caulfield Guineas has always been the goal,” Waterhouse said.  “We didn’t want to rush him into the Golden Rose.”

A homebred for Highgrove Stud’s Ron & Debbie Gilbert, Evacuation was passed-in after failing to make a $150,000 reserve at the 2015 Inglis Easter yearling sale.  He is a three-quarter-brother to LR Canberra Guineas winner Interspeed (Sebring) and is from a half-sister to Wanted (G1 Newmarket Hcp) and Shrapnel (G2 Yallambee Classic).

His final lead-up to the Caulfield Guineas will be the G2 Bill Stutt Stakes (1600m) at Moonee Valley on September 30.

“In 50 years, my father was able to win the Caulfield Guineas just once and that was with Tulloch!” Gai declared.  “I’ve had 8 runners to date and have placed on 4 occasions.

“It certainly is elusive but this year I hope I can break my duck.  After watching Evacuation toy with his rivals, my confidence levels are growing and growing.  I told Kerrin (McEvoy) before the race he was as fit as a fiddle.  The 1400m first-up was no problem whatsoever.

“This son of More Than Ready is versatile, he has a high cruising speed and most importantly is tenacity personified.  When they got close on Saturday, he found another gear and dashed away.

“He’s more than just a speed horse.  I haven’t got to the bottom of him yet and the sky appears to be the limit.” 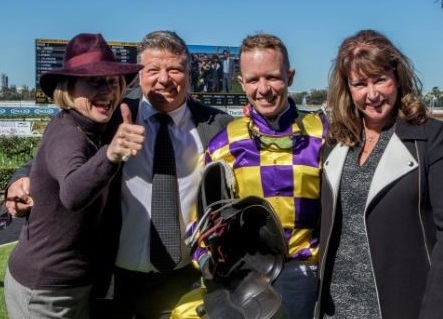