Glasgow Girl has diffused a slow start from an inside draw to break a run of outs in the TABtouch Westspeed Hcp (1000m) at Belmont.

Saturday’s win was her first since a running double at Ascot in April 2021.  She’s a rising 7yo and can’t be far away from the breeding barn for TBWA committeeman Matt Lukatelich and his father Rod.

They can call on more EPONA credits for her maiden cover, whether it be this year or in the future.  There were $7,080 credits before the weekend.

Winning trainer Brad Graham was at a loss to explain why the Rogano mare has only just now begun missing the kick.  “It happened at her last start and I told Victoria (Corver) not to let it happen again,” he said.  “I didn’t know why she’s bombing the start.  She can be a bit hot and maybe resents the ear-muffs.” 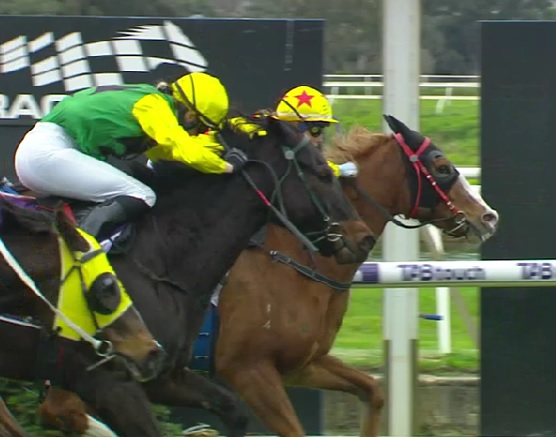 Glasgow Girl (pictured) had the speed to kick through and take the lead before digging deep in the final stages.

“She went forward and was fit enough to keep lifting,” Graham added.  “She’s won 8 races so probably had a class-edge, too.”

Corver was celebrating her birthday and wasn’t too critical of the mare’s barrier manners.  “She was worse last time and was only a bit fractious today.

“She can be quirky but all credit to her in the straight.  We were headed at the 300m but she’s tough and fought back to win it.”

Glasgow Girl is a free-rolling chestnut with a big white blaze and four white stockings and hails from a family developed by Peters Investments.  Matt Lukatelich paid $12,000 for her dam Highest Honour (Elusive Quality) in 2012 after she won three races in the cerise and white silks at Ascot.

Highest Honour has only slipped once in ten years at stud!  Besides Glasgow Girl, she has foaled city winners Aberdeen Queen (Universal Ruler), Sherpa Lass (Rogano) and Guard The Safe (Safeguard).

Her 2yo is an unraced filly named Honouramongthieves (Safeguard) with Fred Kersley.  She has a yearling colt by King’s Troop and weanling colt by Sessions before going back to Sessions on a late cover last November.

Glasgow Girl’s sire Rogano is a Redoute’s Choice brother to Not A Single Doubt.  He was initially based at Oakland Park before transferring to Boallia Farm where he was pensioned from stud duties last month.