Interstate raiders Gatting and Arcadia Queen put Perth in the spotlight with victories of a different kind in Melbourne and Sydney on Saturday.

Gatting produced a giant-killing performance to win the G1 Makybe Diva Stakes (1600m) as a $101 bolter at Flemington.  It came just 20 minutes after Arcadia Queen claimed the G2 Theo Marks Quality (1400m) at Rosehill as a $1.80 odds-on favourite.

Both horses were bred in the west and are raced by TBWA members.

Gatting is owned by an Impressive Racing syndicate managed by Kevin Berry.  Arcadia Queen races for Peters Investments and she could eclipse every other horse ever bred by Bob and Sandra Peters.

Trainer Darren McAuliffe was initially lost for words when Jamie Kah brought Gatting back to scale but quickly regained his composure when asked for a comment.  “I’ve always had a lot of faith in this horse and I knew he was a better chance than the odds suggested.  Otherwise, we wouldn’t have come across.

“Things didn’t go his way first-up at Belmont but he’s got form around Arcadia Queen and Scales Of Justice.”

Gatting stalked front-runner Gailo Chop and then defied the favourite Mystic Journey by three-quarters of a length at Headquarters.  “Jamie rode him perfectly, following instructions to the letter, and we got it right.  He’s a good horse and we’ve got a Group 1 now, so it’s fantastic.”

Gatting is a son of former Darley shuttler Hard Spun and had won five stakes races in the west topped by the G2 WATC Derby and G2 Lee-Steere Stakes.  The Melbourne Group 1 sent his earnings soaring to $1,896,200 and that includes $152,500 in Westspeed bonuses.

He will continue on a Group 1 campaign in the Underwood Stakes on September 29 and Caulfield Stakes on October 12.  His grand-final will be the $5 million Cox Plate (2040m) at Moonee Valley on October 26.

McAuliffe and Berry are reaping the rewards after buying Lonhro mare Stubborn for $17,000 at the 2013 Magic Millions National Broodmare Sale.  She was carrying Gatting and they on-sold her for $200,000 at last year’s National Sale.

“After Gatting, we kept her filly Massagi (Delago Deluxe) and she won at Ascot and Belmont before going to stud last year,” Berry said.  “She’s in foal to War Chant and that’s the same sireline as Hard Spun.  They’re both sons of Danzig.”

Stubborn also foaled a filly by Scenic Lodge sire Universal Ruler before changing hands.  Named Obstination, she was beaten less than a length on debut in a Belmont juvenile in June. 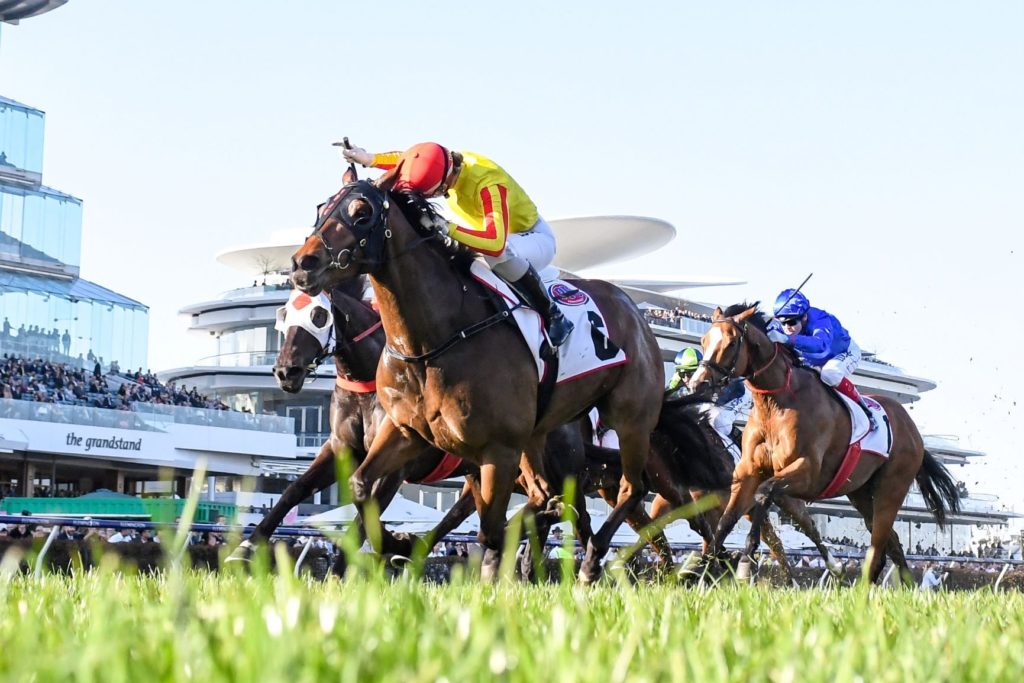