Henny Hughes (USA) is the gift horse that keeps giving.

WA based Rangeview Stud bought Henny Hughes from Darley in 2012 and then went on a dream ride with his Breeders’ Cup winning champion Beholder.

Twelve months later, Rangeview owners Rob and Jody Gray sold Henny Hughes to stand at the Yushun Stallion Station for what must have been Australia’s most lucrative pin-hooking deal in 2013.

His new Japanese owners would have also been in raptures after Henny Hughes colt Asia Express won the G1 Asahi Hai Futurity Stakes (1600m) at Nakayama on Sunday.

Rob Gray is back home at Bullsbrook after escorting Henny Hughes to the quarantine facility in Melbourne last week.  “He will fly to Japan in the New Year,” Gray said.  “It’s been an amazing journey but nothing that horse does surprises me any more.

“The Japanese people will be thrilled with Sunday’s result – good luck to them.  And we still have two crops of Henny Hughes yearlings to sell at the Perth Magic Millions in 2015 and 2016.”

The Asahi Hai Futurity Stakes is worth AUD 1.58 million and is considered one of the premier juvenile events on the Japanese calendar.  Its honour-roll includes former Australian sires Fuji Kiseki, Grass Wonder and Bubble Gum Fellow.

Asia Express (2c Henny Hughes – Running Bobcats by Running Stag) had won his first two starts by a combined 12 lengths and the hat-track was never in doubt once visiting English jockey Ryan Moore sooled him to the front at the furlong.

“It was his first try on turf but, after looking at the pedigree, we thought he would be able to handle it,” trainer Takahisa Tezuka said.   “He had been working well and was in good shape.”

Bred in Florida, Asia Express was a $230,000 buy at the 2013 Ocala 2YO Sale after breezing a bullet 21.00 seconds for 400 metres.  Narvick International agent Emmanuel de Seroux bought him on behalf of Japanese owner Yukio Baba.

Moore, who won the Japan Cup on champion mare Gentildonna last month, had also partnered Asia Express for a 7 length victory in the Oxalis Sho (1600m) in Tokyo on November 23.

“He surprised me – he quickened up so well,” Moore said.  “When I rode him before, he felt like he had a lot of gears.  He’s a special horse and we haven’t got to the bottom yet – there’s more to come.  It will be interesting to see how much progress he makes next year.”

The Asahi Hai Futurity victory is likely to earn Asia Express Champion 2YO honours in Japan for 2013. 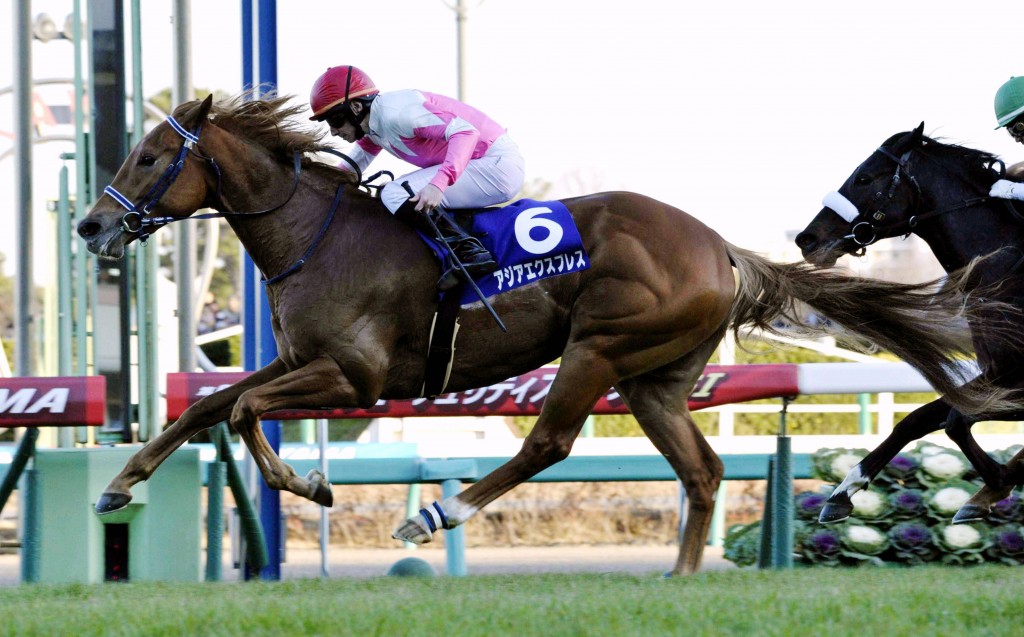