Team Hawkes ruled the roost with Vinery colt Exceedance at Rosehill on Saturday and they closed the card with a running double courtesy of Greyworm and God Of Thunder.

“It’s been an exciting day for our owners,” co-trainer Michael Hawkes beamed.  “Their horses have all performed exceptionally well.”

God Of Thunder is another rising star for the stable on the strength of his come-from-behind victory in the Australian Turf Club Hcp (1100m).  More Than Ready sired him from a family that been very productive over several generations.  “They can all gallop,” Hawkes continued.  “He just needed the time to show it.

“We went as far as we could with him as a colt then made the call to geld him earlier this year.  He’s really starting to put the writing on the wall now.”

Jockey Brenton Avdulla confirmed God Of Thunder is still on a learning curve.  “He wanted to get up on the bridle so I balanced him up when they straightened.  He was always going to win but it’s about teaching him so I let him go through his gears and he did the rest.”

More Than Ready (USA) turned back the clock on Sunday when his 2yo filly Sparkling Sky won a $90,000 maiden over 1700m at Saratoga.  She is trained by Todd Pletcher who prepared the Vinery legend to victories in the King’s Bishop Stakes Gr.1 and Sanford Stakes Gr.2 at Saratoga.

Sparkling Sky is owned by Barry Schwartz and is the 12th individual 2yo winner in North America this year by More Than Ready.  She was his top-priced northern yearling in 2018 when making $650,000 at the Keeneland September Sale.

There was more good news for More Than Ready during the penultimate day of the summer meet at Saratoga.  Owner Bob Edwards reported his Group 1 winning filly Rushing Fall has bounced back from a recent case of dehydration and will be set for the First Lady Stakes Gr.1 at Keeneland on October 5. 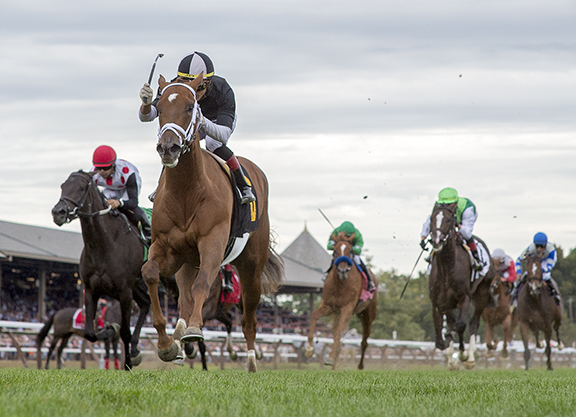