Roy H gift-wrapped another Eclipse Award with a successful defence of the Breeders’ Cup Sprint Gr.1 at Churchill Downs on Saturday.

The More Than Ready champion won the 2017 BC Sprint by one length and extended that margin to more than three panels this year with a commanding victory against the best short-course horses in North America.

Running in cruise control for jockey Paco Lopez, Roy H took command at the half-mile and put the race to bed at the top of the straight.  “He charged today – no problem,” Lopez said.  “He knows what’s going on.  He danced the dance and is a very happy horse.”

The victory marked a milestone for Peter Miller who became the first trainer to saddle back-to-back winners of the same two races in the 35-year history of the Breeders’ Cup.  Earlier in the day, he prepared Stormy Liberal to win the BC Turf Sprint Gr.1 for the second year in a row.

“Roy H is just a real solid, sound horse,” Miller said.  “He brings it every time but I was a little bit concerned when he started moving early.  I told Paco not to go too soon but it was obvious the horse was on fire and loaded from the get-go.”

Bred in Kentucky by Ramona S. Bass, Roy H is by More Than Ready from stakes winning mare Elusive Diva (Elusive Quality) and was purchased for $310,000 by Rockingham Ranch at the 2014 Keeneland 2YO Sale.  He has won 9 times in 22 starts for earnings over $3.01 million.

On a day of mixed-blessings for the Vinery legend, his top-class 3yo Catholic Boy was knocked out of contention in the BC Classic after being severely checked at the start.  He returned to scale with a deep gash to the near-fore ankle.

“We were done the first three steps out of the gate,” trainer Jonathon Thomas said.  “He will get a solid break in Florida and race on next year.  The (G1) Whitney at Saratoga will be his long-range target.”

More Than Ready had Stellar Agent and Winning Envelope qualify for the BC Juvenile Fillies Turf Gr.1 on Friday although the latter failed to gain a start from second emergency.

Stellar Agent ran out of her skin, albeit beaten 6 lengths, to earn a Group 1 third behind runaway winner Newspaperofrecord.  She had won a Saratoga juvenile on debut in August and followed up with black-type at Belmont before a landing a place at 66-1 under the Twin Spires. 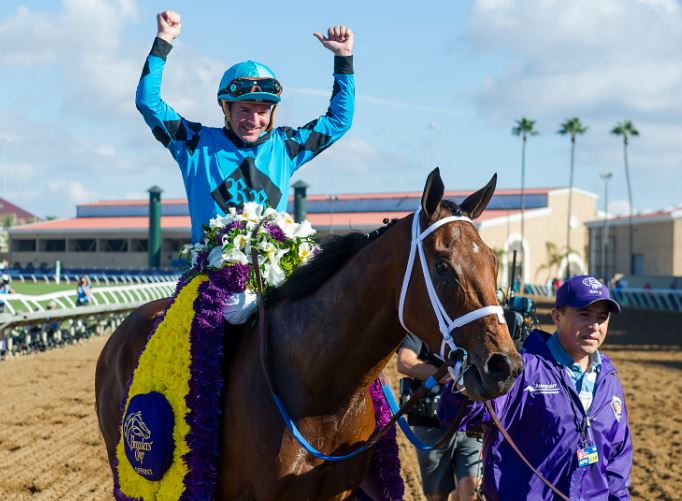