All Too Hard filly Jeweliana puts her unbeaten record on the line in the Bruce McLachlan Memorial (1000m) at the Sunshine Coast on Saturday.

Trainer Steve O’Dea has big wraps on Jewelina who will strip fitter for a return clash with Karaja.  She beat the Zoffany filly at Ipswich a fortnight ago but bookmakers are betting on a turnaround after this Saturday’s race was reduced a furlong from 1200m to 1000m

Karaja has opened a $2.50 favourite while Jeweliana is $4 to complete a hat-trick.

The Bruce McLachlan Memorial is one of the most sought-after races on the calendar for trainers in Queensland.  It’s named after the late, great Caloundra conditioner who died seven years ago this month.

O’Dea prepares Jewelina for owner-breeder Joe Rapisarda.  “It’s great to see her doing so well for Joe.  He’s a long-time client and we also won a stakes race with her dam Bianca Jewel.

“She’s certainly showing plenty of talent like her mum and I like her sire All Too Hard,” O’Dea said.  “There’s a lot of upside and she will be more than handy over longer trips.”

All Too Hard’s Kiwi visitor Demonetization will go the other way when he drops back to 1400m in the Glasshouse Hcp LR at the Sunshine Coast.  He faded from view at the end of 1820m in the Mumm Stakes at Eagle Farm last Saturday and trainer Nigel Tiley will hoping for a glimpse of the form that saw him win last year’s Auckland Guineas Gr.2.

All Too Hard notched his 173rd win for the season when All Too Handy won the Ladbrokes Hcp (1017m) at Moe on Thursday.  She is raced by Spicer Thoroughbreds and jockey Beau Mertens predicts there are better things to come this year.  “She is a better horse ridden quietly and I just let the race pan out in front of me,” Mertens explained.  “She has a quick turn of foot and I let her do the rest.”

All Too Handy’s dam Helping Hand (Fusaichi Pegasus) won a Flemington nursery for Patinack Farm and she is a half-sister to No Evidence Needed (Let’s Elope Stakes Gr.2).

Vinery stands All Too Hard for a $27,500 (inc GST) and he received a wrap from Peter Moody in ANZ Bloodstock News on Thursday.  “I’m thrilled that Vinery, who I trained a few horses for over the years, have managed to lure More Than Ready back to Australia.

“Vinery is a wonderful farm and they also had All Too Hard pass 100 individual winners for the season.  That’s a phenomenal effort and he’s an underestimated stallion in my book!”

More Than Ready is set to win more black-type in North America on Saturday starting with Say the Word in the King Edward Stakes Gr.2 at Woodbine.  His Group 1 winning filly Uni (GB) is an odds-on favourite for the Perfect Sting Stakes LR at Belmont Park and his 2yo filly Magic Dance is also at the head of markets for the Debutante Stakes LR at Churchill Downs.

Magic Dance was an eye-catching debut winner under the Twin Spires earlier this month for Three Chimneys Farm and trainer Steve Asmussen.  She is from a daughter of 2005 Breeders’ Cup Distaff Gr.1 winner Pleasant Home (Seeking the Gold). 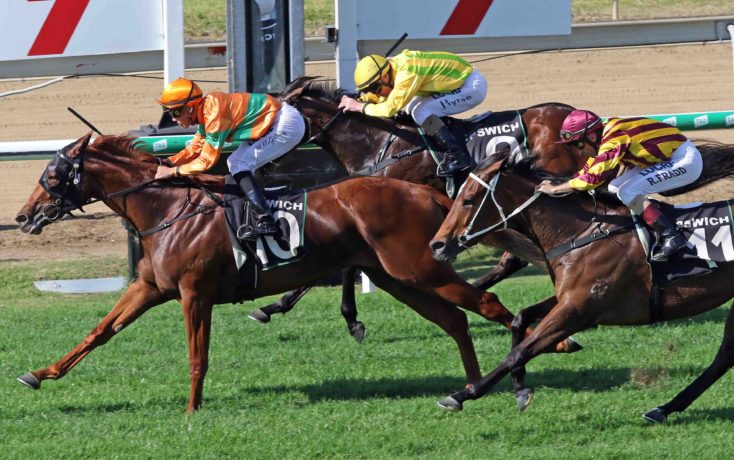