Trotamondo (Chi) will have to hold fire for his first WA-bred winner after Turbo Mondo pulled up sore at Lark Hill earlier this week.

Turbo Mondo looked an early winner for trainer Colin Webster and owner-breeder John Reynolds when she nosed out Weona Brute (Oratorio) in a Belmont 2yo trial on June 14. 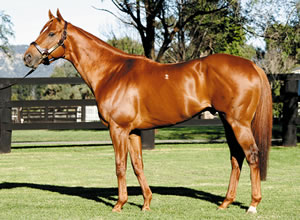 She is the first foal from Is It Windi Turbo (Helenus) who won twice in a career restricted to three starts in Geraldton.  Second-dam Chanti Tropez (Zedrich) was bred by Scenic Lodge and she won at Pinjarra and Bunbury for trainer Liz Strempel.

Reynolds has an Ouqba (GB) yearling half-sister to Turbo Mondo and he sent Is It Windi Turbo to Alwyn Park sire Maschino last year.

Trotamondo (pictured) swept the Chilean 3YO Triple Crown and a year later won the G3 Native Diver Stakes in California.  A son of champion sire Hussonet, he was initially based at Yarraman Park in the Hunter Valley before transferring to Belay Stud owner Bob Martin in Greenough.