Harlem (GB) is the latest cups’ candidate to emerge for Lindsay Park and Astute Bloodstock (FBAA) following his dominant victory in the G3 Naturalism Stakes (2000m) at Caulfield last Saturday.

The Juddmonte Farms-bred stallion has firmed into $11 for the G1 Caulfield Cup (2400m) on October 21.  “We’ve always liked him and it was a dominant win,” co-trainer Ben Hayes said.  “The writing was on the wall after his excellent run in the Heatherlie although we thought it still might have been a bit short today.  Look out Caulfield Cup!”

Harlem (Champs Elysees) had won his maiden as a summer 3yo at Longchamp and followed up with a Listed victory in the Prix Frederic de Lagrange (2400m) at Vichy.  He was also placed in Group company at Saint-Cloud and Chantilly last year.

His dam Casual was trained by Dermot Weld for Juddmonte owner Khalid Abdullah and signed off her career with a Leopardstown victory over 2800m.  She is a half-sister to Rich Coast (LR Cork Navigation Stakes).

Astute Bloodstock agent Louis Le Métayer identified Harlem as an ideal Cup prospect for Australia.  “He was entered for the Tattersalls Horses in Training Sale last October and was the only horse that we really wanted,” Le Métayer recalled.  “In order to avoid a bidding war, we decided to team up with Alistair Donald who looked keen on the horse.

“Despite our joint effort, the bidding war did happen and Harlem was purchased on behalf of a Chinese-Australian partnership for 520,000gns (AUD 882,825).  It’s nice when a plan comes together and we’re very much looking forward to the Caulfield Cup.”

Le Métayer purchased the Irish-bred stayer son of Zoffany on behalf of David Hayes and a syndicate that includes Scott Perrin, Rupert Legh, Robert Hill-Smith & John Valmorbida.  Reaching a Timeform rating of 119, he is currently quoted at $26 for the Caulfield Cup and $21 for the Melbourne Cup. 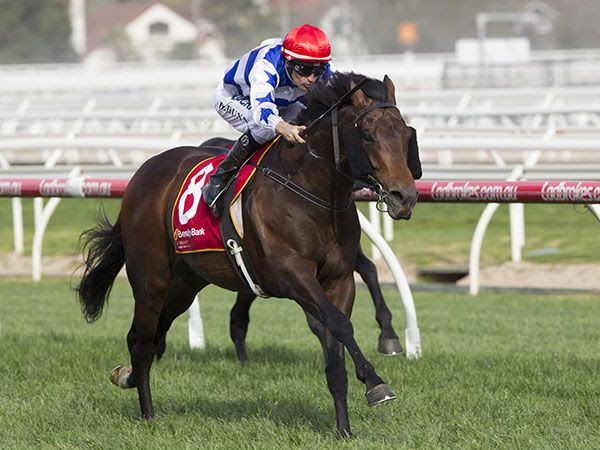