Bendigo trainer Aileen Vanderfeen has purchased Globetrotter gelding Harlem Star and has him back in work for a return to racing in October.

Harlem Star was initially prepared by fellow Bendigo trainer Brad Cole and won a Wangaratta 3yo maiden on debut over 1000m.  “He’s a beautiful, strong horse with a great temperament,” Cole said after the barrier-to-box victory.  “We’ve always known he could really gallop.”

The big chestnut followed up with further victories at Warrnambool and Kyneton in the ensuing 12 months before losing his way last season.  “He’s had stomach surgery and been given a clean bill of health,” Vanderfeen said.  “Hopefully, that’s solved all the problems and he can regain form this season.

“I bought Harlem Star outright and Craig Kirkpatrick, who has been his track rider ever since he was broken in, is also a part owner.  I like Globetrotter and bid for a few of his at the yearling sales.  I missed out at Oaklands but now I’ve got the one I wanted.

“I had seen him at the track and told Brad to let me know if the owners ever wanted to sell.  He’s got loads of ability and I’m going to keep him to sprints.”

Harlem Star will race first-up at the historic Gunbower Gold Cup meeting on the Murray River.  Vanderfeen has pencilled in a restricted sprint over 1100m on Saturday, October 7.

His dam Angels Star (King Of Kings) is from a half-sister to stakes winners Encores, Irradiate and Sir Laurence.  She has also foaled Globetrotter mare Red’s Sister Rosie who won her maiden at Echuca last season.

He also hit the jackpot with superstar mares Winx and Zenyatta.

Globetrotter (USA) is about to start covering his first WA book at Forrest Beach Estate in Capel.  Recently purchased by south-west breeders Robbie and Colin Smith, he has been priced at a $2,500 (inc gst) service fee.  For further information, contact Robbie Smith on 0428 521 166 / rgnsmith1960@gmail.com 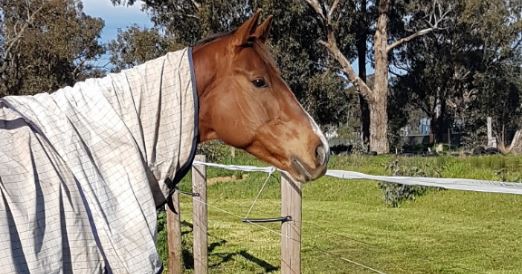