Dovetail Diva has been a frustrating conveyance for connections but she came good with a vengeance at Eagle Farm on Saturday.

The Headwater filly never looked like being beaten under Samantha Collett who controlled proceedings with a well-timed, front-running ride in the Roku Gin Stakes (1200m).  She defeated older mares Zoukina (Zoustar) and Cherry Soda (Fastnet Rock) to credit Collett with her first win in Brisbane since relocating from New Zealand.

Dovetail Diva had won on debut at Doomben in February but things went pear-shaped in black-type company after a short break in May.  She spat out the bit and was beaten a dozen lengths in the Bill Carter Stakes LR in what was a mystifying run for trainers John Symons & Shelia Laxon.

“She just wasn’t there mentality and we couldn’t work out what had gone wrong,” Symons admitted.  “We tested her for everything but nothing showed up.  And we took her to all the trials and jump-outs to help her settle down.

“It was a long haul so all credit to our staff who helped her education.”

Dovetail Diva (pictured with her owners at Eagle Farm) resumed last month and Symons knew she was on the way back after a close second to Queen Sweeper at the Sunshine Coast on December 5.  “She was superb that day and it was a push-button win this afternoon.  I think she will be better at 1400m when she can roll along with an easier speed map.

“The Headwaters are going from strength-to-strength and I can’t believe we got her for $60,000 at the 2020 Magic Millions 2YO Sale.  She’s an exceptional mover and it’s exciting to have a horse of her calibre in the stable.” 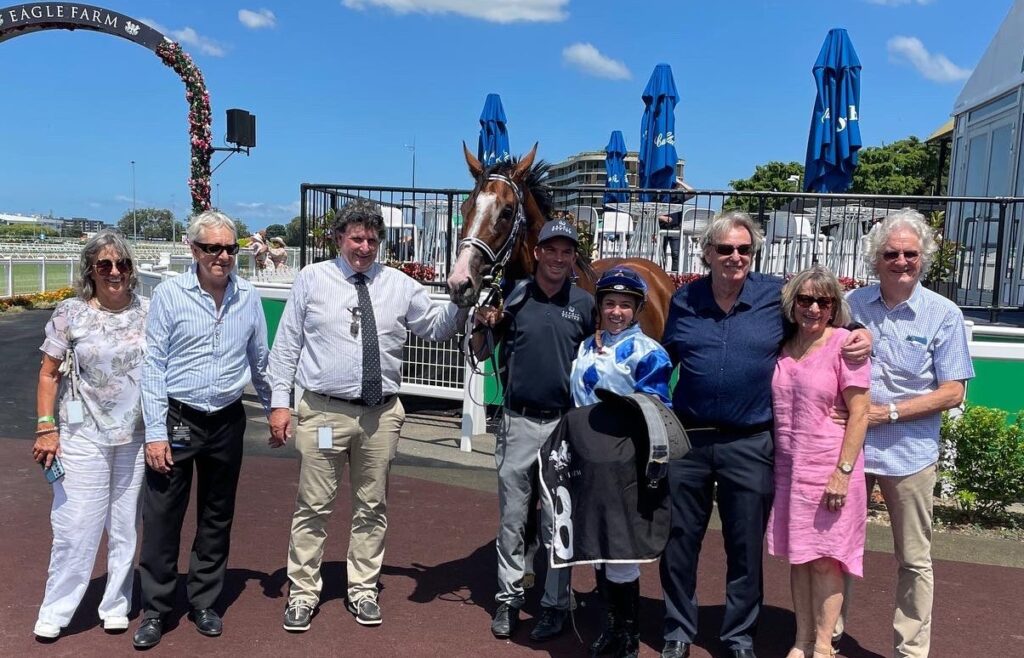