Kelstar Park has tapped into the emerging High Chaparral sireline to stand his Group 3 winner Hi World in Western Australia.

Hi World won the G3 Carbine Club Stakes (1600m) and G3 Frank Packer Plate (2000m) in Sydney for a Slade Bloodstock syndicate that had purchased him for $120,000 from Coolmore Stud at the Gold Coast Magic Millions Yearling Sale.

Kelstar Park owner Kelly Davis bought the York property in 2018 and has been developing the infrastructure and building her broodmare team to operate as a stud farm.  “When Hi World came on the market I had to have him,” she said.  “He’s a beautiful stallion and I love his pedigree and performance record.

“I was born in Kulin and always had a passion for horses.  I rode picnic winners in the Wheatbelt which strengthened my love for racing.  Then I dabbled in training my own horses for a while before deciding breeding them was my destiny in the industry.”

Hi World (High Chaparral – Beauty World by Danehill Dancer) was bred in Victoria and is an ideal choice as foundation stallion for Kelstar Park after impressing jockey Kerrin McEvoy and trainer Peter Moody with his Group 3 running double at Randwick.

“It wasn’t really the plan to lead, but he pinged the lids and actually raced a little bit fierce through the first part,” McEvoy said after the Carbine Club.  “He’s determined and gave me a real good kick at the 300m.  He was still strong on the line and can probably go further than a mile.”

Hi World confirmed that prediction with another front-running victory in the Frank Packer Plate a fortnight later.  “He’s a quality colt and an exciting proposition,” Moody said.  “He relaxed nicely for Kerrin and that was very pleasing.  He probably floated a little bit in the straight but was still good enough to get the job done again.”

High Chaparral (Ire) shuttled from Coolmore Stud’s Irish base to its Australasian affiliates before an all too early demise aged 15 following colic surgery.  He sired 131 stakes winners world-wide and his sire sons So You Think (NZ), Dundeel (NZ) and Toronado (Ire) have all been represented by Group 1 winners in their early years at stud.

Toronado filly Solaia was last seen leading all the way in the LR Natasha Stakes at Ascot and his Andy Phelan homebred Come Right Back looks set for another successful city campaign after a first-up victory at Bunbury last month.

Hi World will stand for an introductory service fee of $4,400 (inc GST) at Kelstar Park this year.  For further information, Kelly Davis can be contacted on 0455 592 413 or at kelstarpark@gmail.com 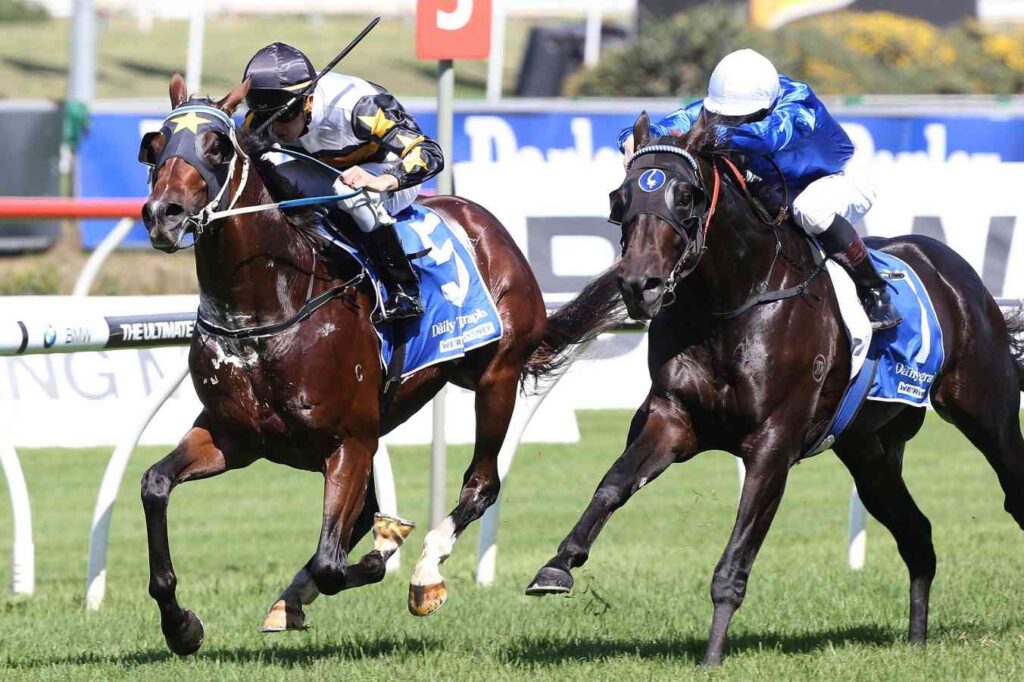