Mt Hallowell breeder-owner Craig Thompson believes Hoi An is a live chance for the G2 Karrakatta Plate (1200m) in April.

Hoi An (2f Longma – M’lady Hallowell by Wanted) has shown stakes potential at both starts this month and has the pedigree to make the grade at that level.  She put the writing on the wall first-up as a $51 longshot when a close third to Sniparoochy and Ex Port Man at Ascot.

Sent to Bunbury second-up on Australia Day, she started in the red and speared through a gap in the straight before fending off a late charge by Serviceman (King’s Troop) in the Byron Bay Brewery Maiden (1008m).   “She lived up to her breeding at Bunbury and she has enough ability to be prominent in the Karrakatta,” Thompson told WAN journalist Ernie Manning.

Hoi An is one of just a half-dozen foals sired by Longma at Mt Hallowell Stud in Denmark.  Her dam M’lady Hallowell is from a half-sister to Group 1 winning mare and Group 1 winning producer Spinning Round (Dixieland Band).

Longma (Sebring) was bred in the purple being a half-brother to Group 1 winners Gimmethegreenlight (South African Queen’s Plate) and Ofcourseican (Coolmore Classic).  He won a Werribee nursery by 8 lengths for trainer Mick Price before transferring to Gai Waterhourse where he won at Warwick Farm and was runner-up in the LR Daybreak Lover Stakes at Eagle Farm.

“He was one of my favourites and was going to be anything after Werribee,” Thompson recalled in an interview with WAN journalist Jay Rooney.  “I got offered $1.4 million from Hong Kong but knocked it back.”

Injuries curtailed his racing career and his stud career was cruelly cut short when he died following foot surgery.  His only other starter besides Hoi An has been Belmont winner Zadok.

Mt Hallowell Stud will offer Day 1 yearlings by Sessions and Rubick at the upcoming Perth Magic Millions plus a colt and filly from the initial crop of Gold Standard who stands at Spendthrift Farm in Victoria.

Gold Standard, like Longma, is a son of Sebring and won a G2 Stan Fox Stakes for Thompson at Rosehill.  His Day 2 filly at the Magic Millions (Lot 184) is from a More Than Ready sister to Mt Hallowell’s LR Sir Ernest Lee-Steere Classic winner Lusaha. 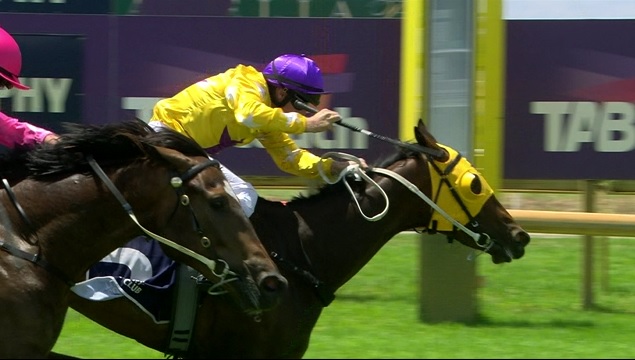