Holyoake showed the ability that will stand her in good stead in better grades with a promising victory at Ascot on Wednesday.

The lightly-raced All American filly ranged up to the leaders at the furlong to get the verdict in a three-way photo from Peace Prize (Alfred Nobel) and Temptacion (All Too Hard). Trainer Brett Pope gave her a short prep during the winter season at Belmont and she was ready to deliver second-up in the Amelia Park Maiden (1400m).

“She’s a nice filly,” Pope explained. “She’s still a bit new being a homebred that hasn’t left the farm that often. She got back first-up when the 1000m was a bit sharp. She came home okay and I decided to step her straight up to 1400m today.

“We won’t give her too many runs this time in. I want to set her for a nice fillies & mares race next prep.”

Holyoake (3f All American – Phormium by Xaar) was bred by Pope’s partner Tameeka Brown at their Coolup property from a family with a staying background. Her dam won 6 races up to 2100m and her half-brother Wool Zone won a LR WA St Leger.

Phormium had a season off after delivering Holyoake and she foaled an All American colt the following year.

“She travelled into the race and kept kicking,” McNaught reported after coaxing Holyoake back to the enclosure. “She’s still green but showed good qualities to finish it off under pressure.”

All American has sired the winners of 20 races this season including his Macau-based sprinter Grexit who is on a hat-trick following a short-head victory on October 10. He has won 8 races and the equivalent of AUD 331,000 for owner Chan Yu Fung Bada. 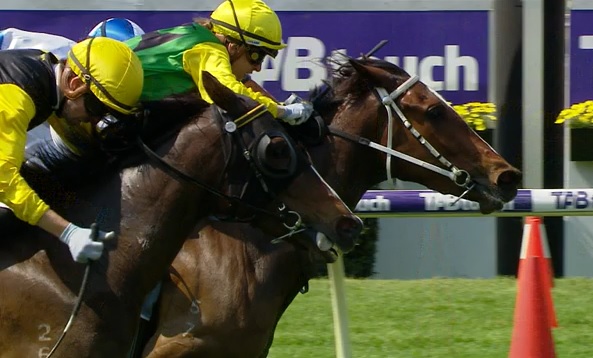