Vinery sire Myboycharlie has a couple of rich spring targets on the radar with his class gallopers Jameka and Charlie Boy.

Trainer Ciaran Maher has home-track advantage with Jameka when she takes on Stay With Me and Pasadena Girl in the G2 Thousand Guineas Prelude (1400m) at Caulfield this Saturday.  They filled out the trifecta in the LR Atlantic Jewel Stakes (1200m) at Moonee Valley on September 5 and the extra distance will suit the local filly.

Stepping up another furlong will be an even better fit when Jameka stretches out to 1600m in the G1 Thousand Guineas (1600m) on October 10.

Jameka (3f Myboycharlie – Mine Game by General Nediym) is raced by Shadow Glen Stud owner Bill Cockram and Darley Victoria general manager Andy Makiv is also part of the syndicate that paid $130,000 for her at the 2014 Inglis Melbourne Premier Sale

Trainers Peter and Paul Snowdon have taken Charlie Boy back to Sydney after coming within a neck of a hit-and-run win in the LR Testa Rossa Stakes (1200m) at Caulfield last Saturday.

Racing first-up since the G1 Stradbroke in June, he sprinted between runners to hit the front only to be nailed late by Fell Swoop.  Giving the winner 5.5kg made all the difference in the final stages.

Charlie Boy (5g Myboycharlie – Maritime by Falbrav) is raced by Triple Crown Syndications and he had claimed the G2 Danehill Stakes at Flemington on a previous trip to Melbourne.  “I thought we were going to win,” jockey Steven Arnold said.  “But with 60kg first-up, he just peaked about 50 metres from home.”

Team Snowden will return to Melbourne with Charlie Boy for the LR Paris Lane Stakes (1400m) at Flemington on Sunday week, October 4.  He boards with Malua Racing down south and will stay there for black-type sprints during the Melbourne Cup carnival.

Triple Crown raced Myboycharlie’s G1 Sydney Sires’ Produce Stakes winner Peggy Jean and she has been retired and mated with I Am Invincible.  And Myboycharlie can crack another international Group 1 when his globe-trotting filly Euro Charlie runs in the Sun Chariot Stakes at Newmarket on October 3. 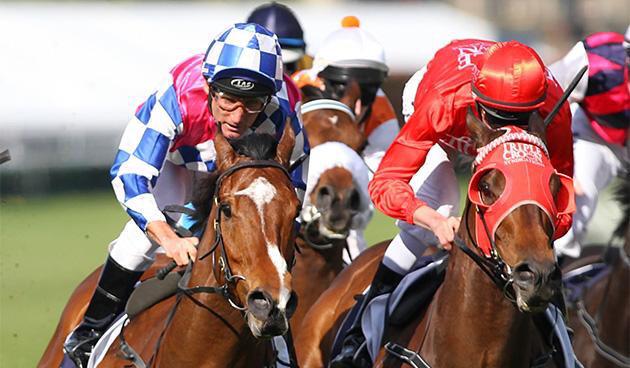