Owner Tony Santic sold the five year-old shortly after he faded from view in the G2 Bobby Lewis Stakes (1200m) at Flemington on September 12.  He’s a three-quarter brother to Starspangledbanner and had been retained by the Makybe breeder after failing to make a $250,000 reserve at the 2012 Inglis Easter yearling sale.

Il Cavallo (5h Choisir – Gold Chant by El Moxie) broke a class-record on debut at Sandown as an autumn two year-old and returned for a short spring campaign starting with a close fourth in the G3 Vain Stakes at Caulfield.

After an extended break last year, he rebounded with a 1000m hat-trick during a winter campaign that included two Sandown Hillside victories on either side of a four-length hit in a heat of the Creswick Series at Flemington.

The Peter Moody trained sprinter won again over the minimum trip in the VRC Recognition Hcp at Flemington in July and earned black-type when placed at his penultimate start in the LR Carlyon Stakes at Moonee Valley last month.

“He’s an outstanding type of horse with a great pedigree and a terrific temperament so he ticks all the boxes for us,” Chequers Stud owner Mark Fraser-Campin said.  “He will race on over here and should be very competitive – we will be looking at the (G1) Railway Hcp.”

Besides the Starspangledbanner connection, Il Cavallo’s dam has also foaled 2014 One Thousand Guineas winner Amicus (Fastnet Rock) who can double her Group 1 count in the Sir Rupert Clarke Stakes at Caulfield this Saturday. 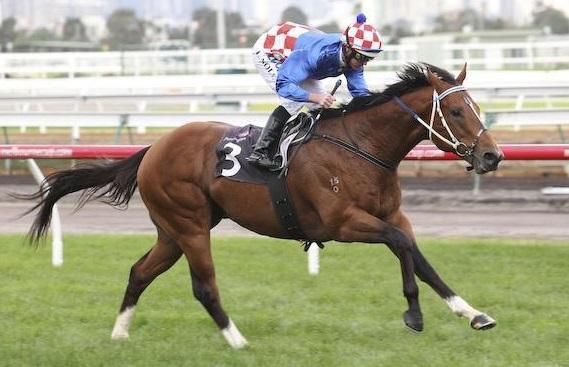