Hardy sprinter-miler Hooked nailed his fourth Group win and his first for Robert Smerdon at Caulfield on Saturday.

Hooked is one of 13 stakes winners by Vinery Stud sire Casino Prince and one of his best following a hard-fought victory in the Group 3 Victoria Hcp (1400m).  “He drew favourably and with his gate speed was always travelling comfortably,” Smerdon said.  “He got cover and a good cart into the race and was too strong.”

Hooked will now be set for the Group 3 Lee Stakes (1600m) at Morphettville on May 20.  He won Group races at Randwick, Newcastle and Moonee Valley prior to joining Smerdon at Caulfield.

More black-type in Adelaide will take him to within one of All Too Hard.  The champion colt is the most successful son of Casino Prince with 6 Group wins to his credit.

“Today’s race played out like it looked on paper,” Smerdon added.  “The runner-up Charmed Harmony is a brave horse from the front but we had the softer run and got the win.”

Hooked and his stakes-placed sister Casino Card are from Sydney winner Absolute Lure (Lure).  The mare is a half-sister to G3 Coongy Hcp winner Fire In The Night and she has a Casino Prince 2yo colt with Nick Nolan in Queensland.

Ultra Thoroughbreds bought Hooked for $600,000 at a Patinack Farm dispersal in 2014 and he’s nudging $1 million in earnings.  Casino Prince will stand at Vinery Stud for a service fee of $11,000 (inc gst) this year. 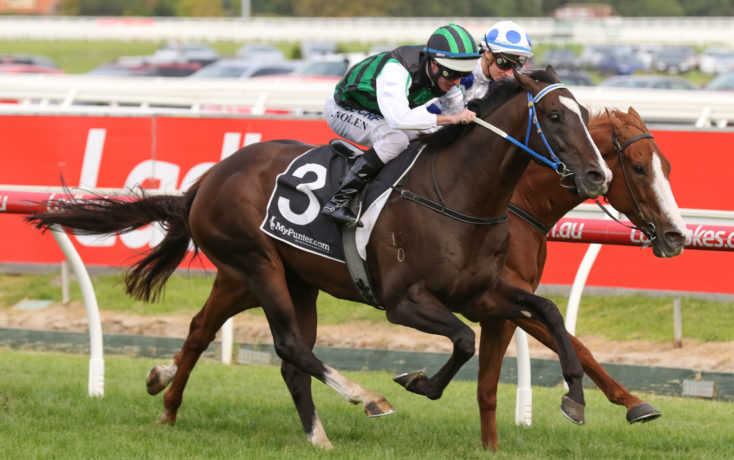