Queenslea Park horseman Aaron Morton has close ties with Mungrup Stud and that combination was back in the winner’s circle at Kranji on Friday night.

Hooper (5g Oratorio – Sayder by At Talaq) claimed his third scalp for owner C K Phua and trainer Cliff Brown with a fast finishing victory over 1100 metres.  “His two previous runs had been good and I had no hesitation backing him up,” Brown said.  “Riding him off the pace and letting him finish off worked well.

“It’s good to get another winner for ‘C K’ and hopefully there’s another win or two in store for him.”

Morton sold the Singapore winner for $75,000 at the 2010 Perth Magic Millions.  He was initially owned by Peter Bell and Ray Meadowcroft but was sent off-shore without racing after winning a trial at Belmont.

Irish Coffee was another Singapore graduate from the 2010 Perth Magic Millions by Mungrup Stud sire Oratorio (Aus).  He has won 5 races up there and the equivalent of AUD 311,340.

Morton is based at Pingelly and he catalogued 10 yearlings at the 2013 Perth Magic Millions under the Queenslea Park banner although the majority were prepped for Mungrup clients.

His current yearlings include a half-sister to Hooper by Mungrup sire Hala Bek (Ire). 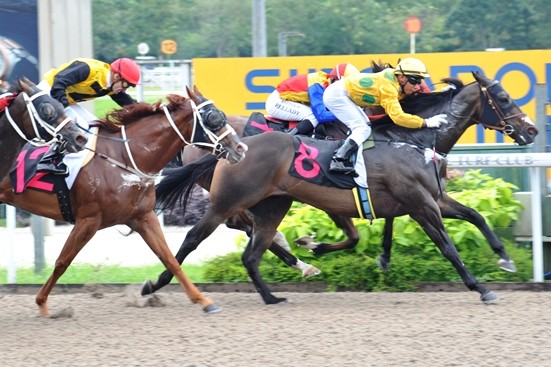 HOOPER
Son of Oratorio wins in Singapore on Friday