Vinery completed Book 1 of the Gold Coast Magic Millions Yearling Sale with huge gains on its figures from 2021.

Vinery (as agent) sold its final Book 1 filly on Saturday when The Autumn Sun – Cleanup (Lot 863) was knocked down for $400,000 to Brae Sokolski of Yes Bloodstock.  She is a half-sister to multiple Group 1 winning mare Nettoyer (Doncaster Hcp & Queen Of The Turf Stakes).

Champion Vinery sire All Too Hard was popular during the evening session starting with leading agent John Foote who snapped up his colt from Cocoexcel (Lot 866) for $200,000.  Bred by Vinery partner Steve McCann, he is closely related to Brando (Savabeel) who holds a Group 1 nomination for the Thornden Mile at Trentham on January 29.

All Too Hard finished with a perfect clearance-rate for his Book 1 yearlings when Gold Coast trainer Michael Costa paid Willow Park $310,000 for his colt from Crimson Cash (Lot 888).  “He’s probably the best quality colt I’ve ever purchased,” Costa claimed.  “He’s one of the most beautiful walkers on the complex and I really wanted him.

“I’m a big fan of All Too Hard.  You’re every chance of getting a Group horse with an All Too Hard and we had to fight to get him.”

Costa also reported his brilliant debut winner Manhood (Headwater) is receiving chiropractic treatment after pulling up sore across the hindquarters at the Gold Coast last week.

Peter Moody trains a promising Headwater 2yo named Waterworld in Melbourne and he returned south with another colt by the Vinery sire after parting with $200,000 on Friday.  He was offered by Cressfield and their previous graduates include Headwater fillies Jamaea and Aquagirl.

“He’s hard to fault and was one of our better yearlings here,” Cressfield’s Wayne Bedggood said of the Headwater – Black ‘n’ Tough colt (Lot 809).  “He’s an athlete and will go early.”

Waterworld, who races for a Blueblood Thoroughbreds syndicate, made his debut at Flemington on Saturday and, despite laying-out under pressure, did well to finish fourth behind runaway winner Lofty Strike.

Star Turn filly Me Me Lagarde came from the clouds to finish a within a length of King Of Sparta in the Magic Millions Guineas (RL, 1400m) for trainers Toby & Trent Edmonds.

The Gerry Harvey homebred jumped from barrier 18 and will be winning an autumn or winter feature on that performance.  “We’re shattered to run second to be honest,” Trent Edmonds said on Saturday.  “But she’s a pretty good filly and is off for a break now.”

Star Turn’s Book 2 filly from So Stylish (Lot 991) was a $150,000 buy for John Symons and Sheila Laxon on Sunday.  She’s the first foal of a half-sister to Testa Rossa’s Sydney Group 3 winner Heart Testa).

Dovetail Diva had given the Sunshine Coast couple a great sight in the Magic Millions Guineas on Saturday.  The Headwater filly led into the straight and kept fighting to collect $50,000 for finishing fifth.

Vinery has 30 yearlings being prepared for the Inglis Classic Sale at Riverside Stables between Sunday, February 6 and Tuesday, February 8. 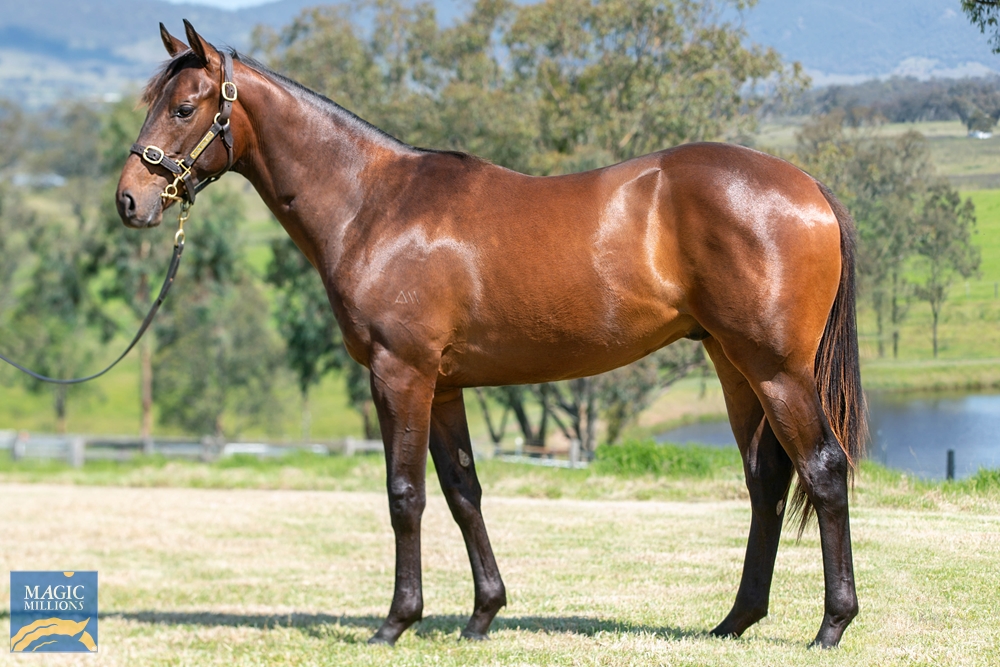