Capel trainer Bruce Watkins has given Eldorado River time to find her feet with a patient program that has every chance of paying off for her owners this year.

Eldorado River (Toronado) had cost Watkins $16,000 from Clare Downs Stud at the 2019 Perth Magic Millions and that looked a bargain buy at Pinjarra last Thursday.

Apprentice Jett Stanley let the mare balance up in the straight and she sprouted wings to win running away by over a length at the end of 1600m.  “We knew it would be a while before she reached maturity,” Watkins said.  “And she has great staying breeding.”

Watkins gave Eldorado River two starts at Bunbury as a spring 3yo and she didn’t reappear until a year later when working home over 1300m at Belmont in November.  Her second campaign didn’t get properly into gear until she stretched out to a mile.

Her NZ-bred dam Sauv Blanc Babe (Don Eduardo) won at the Sunshine Coast before changing hands off the track at the 2016 Inglis Broodmare and Weanling Sale.  Agent John Chalmers bought her for $16,000 on behalf of Clare Downs owner Norm Burren.

Sauv Blanc Babe is a half-sister to Group 1 placed filly Belle Miraaj (Iffraaj).  And, as Watkins suggested, the family has a Kiwi-staying pedigree through the second, third and fourth dams who are by Carnegie, Crested Wave and Oncidium.

Sauv Blanc Babe’s most recent foal is a War Chant 2yo colt that was purchased by Justin Warwick for $40,000 at the 2021 Perth Magic Millions.

Clare Downs has the only yearling catalogued by Group 1 sprinter Hellbent at the Perth Magic Millions next month.  Hellbent stands alongside his sire I Am Invincible at Yarraman Park and his first crop includes the Stakes-placed fillies Miss Hellfire (RL Wyong Magic Millions 2YO Classic) and Bohemian Daisy (G3 VRC Ottawa Stakes).

The Hellbent – Shamelessly colt (Lot 33) being prepared by Clare Downs in the Great Southern is from a winning half-sister to Divine Rebel (G2 ATC Chairman’s Stakes).  There are five Stakes performers below Group 1 winning second-dam It’s My Sin (Success Express). 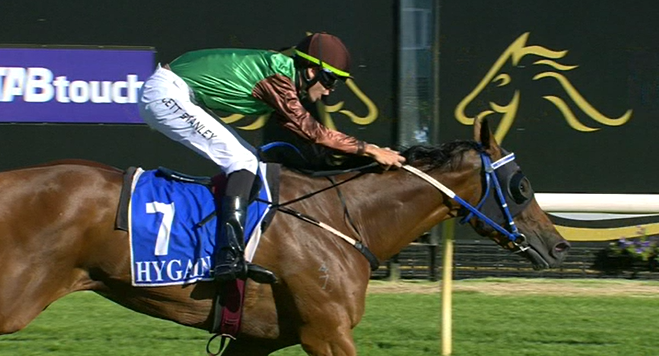