Fabergino upheld Perth’s sprint form in Melbourne earlier this season and Red Can Man rubber-stamped the west’s credentials at Caulfield on Saturday.

Red Can Man had won Listed events at Ascot (Fairetha Stakes) and Belmont ( H G Bolton Sprint) before graduating to a Group 3 victory in the Sir John Monash Stakes (1100m) at Caulfield on Saturday.

Previously prepared by Steve Wolfe, the Gingerbread Man gelding transferred to Mornington trainer David Brideoake and only required one sighter to find the winning groove interstate.  “We were going to run him at Flemington last weekend but didn’t know if he would handle the track,” stable representative Matt Jenkins said.  “We decided to wait the extra week and thankfully it worked out.

“The owners believed he was up to this level and he showed that today.”

Winning jockey Ben Melham kept front-runner Malkovich in his sights and drew level at the furlong to run out a neck winner in 63.47s.  “It was a good speed but that suits my bloke,” Melham reported.  “He’s a big, bold, on-pace horse and covers a lot of ground.

“He really knuckled down late and I think he’s in for a really good preparation.”

Korilya Stud’s Ellie Giles bred him by using Yarradale Stud stallion Gingerbread Man over Brocky’s Ace (Surtee) who is also the dam of Quilista (Scandal Keeper).  She was purchased by Cressfield Stud for $1 million at the recent Magic Millions National Broodmare Sale.

Brocky’s Ace foaled a War Chant (USA) colt last October and Giles then bred her back to Gingerbread Man.

Gingerbread Man (Shamardal) had grabbed another Perth Listed event last Saturday when Chili Is Hot won the LR Belmont Oaks.  He stands at Yarradale Stud for $5,500 alongside War Chant ($11,000) and Bradbury’s Luck ($3,300).  All fees (inc GST). 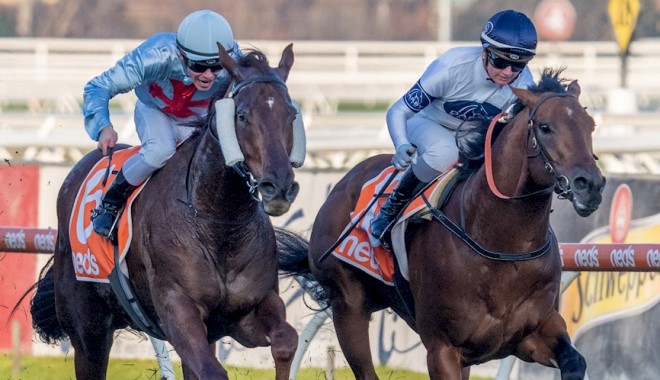