Swettenham owner Adam Sangster sold her on behalf of his good friend, the late Phil Sly.  Interest appeared to stall at $200,000 before several interested parties peppered bid-spotters around the parade ring.

“Damien and I both rate her very highly,” Anderson said.  “She’s a lovely individual and was a high-priced yearling in Japan.  She’s a half-sister to Caulfield Cup winner Admire Rakti and that will help when we sell the foal at one of the major yearling sales.”

Vamoose (Admire Moon) is due early off a September 1 cover at Shadai Stallion Station.  “Hopefully, the stars align and it’s a colt,” Anderson added.  “We will assess the foal before deciding on a stallion for this year.”

After winning his second G1 Hong Kong International Sprint by five lengths in 2013, Lord Kanaloa was awarded a 128 rating by the International Federation of Horseracing Authorities.  That bettered the previous record for a sprinter of 125 held by 2003 July Cup winner Oasis Dream.

Swettenham also sold USA bred mare Anna Dana in foal to its champion shuttler Toronado.  She’s by a Mr Prospector sire from a half-sister to Street Cry and was a bought by Emirates Park for $110,000. 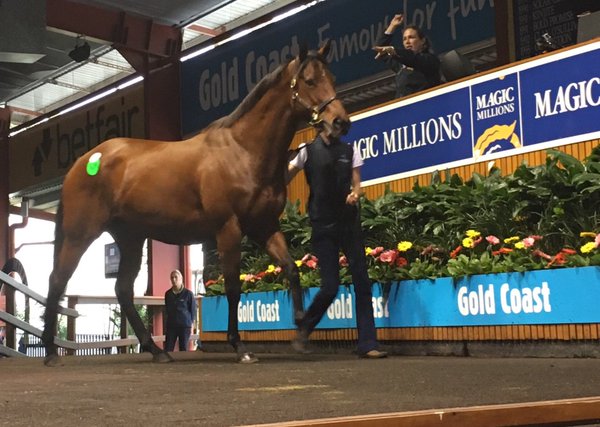