China Horse Club has confirmed Victorian-bred Group 1 winner Precious Gem is still in the mix for the G1 Stradbroke Hcp (1400m) after fetching $825,000 at the Magic Millions National Mare Sale.

The Econsul mare is a last-start winner of the G1 Robert Sangster Stakes in Adelaide and remains on track for the $1.50 million Stradbroke at Eagle Farm next Saturday, June 11.  She is quoted at $34 in pre-post markets for Queensland’s richest race.

Agent Michael Wallace said being a Group 1 winner made her an attractive broodmare and that was evidenced by the price-tag.  “She’s a nice investment and fits the bill among several young mares China Horse Club has purchased recently,” he said.  “She will probably go to stud this year and we will consider stallions like Pride Of Dubai and Vancouver.”

Vendor Brett Howard of Glenesk Thoroughbreds said it was always the intention to sell Precious Gem at the National Sale.  “That’s why we sent her to Henry Dwyer late last year,” he revealed.  “She’s in career-best form and I reckon the move has added $600,000 to her sale price.”

Among its other buys from Victorian vendors included $1.40 million for Crystal Flute (Encosta de Lago) from Teeley Assets.  The 3yo filly is a sister to stakes winners Precious Lorraine and Lucky Raquie and their dam is a sister to Redoute’s Choice.

Estonian Princess (Snitzel) was also on their shopping list at $520,000 from Rosemont Stud as were Atlantis Dream (Elusive City) out of Darren Weir’s Forest Lodge Racing for $360,000 and Strykum (Stryker) from Baystone Farm at $150,000. 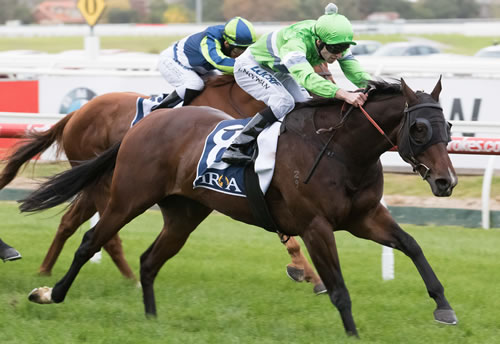