Topping the leaderboard was a Distorted Humor colt from G1 Spinster Stakes winner Mushka (Empire Maker) that made $1.65 million to the bid of Shadwell Estates.

“He has a good pedigree, nice conformation and he fitted into our program,” Shadwell general manager Rick Nichols said.  Sheikh Hamdan’s Shadwell operation was the session’s leading buyer with four yearlings for $3.80 million.

A Smart Strike half-sister to Kentucky Derby and Preakness Stakes runner-up Bodemeister was next best at $1.30 million.  The filly is out of stakes-winning mare Untouched Talent and will be trained by Bob Baffert who also prepared Bodemeister.

“She’s a really nice filly, and she’s staying in America, which is good,” Baffert commented.  “So many good fillies have left the States.”

The last crop of leading sire A.P. Indy was led by a $1.10 million filly bought by Mandy Pope’s Whisper Hill Farm.  She is from G3 Arlington-Washington Lassie winner Moonlight Sonata.  “She’s gorgeous and was my pick of the sale,” said Pope.  “Being the last of the A.P. Indy’s made her more valuable.”

The other millionaires included a War Front half-brother to G1 Acorn and Test Stakes winner Contested that realised $1.05 million for a syndicate that includes long-time owner Adele Dilschneider.

And Chuck Sandford paid an even million for a Street Cry half-brother to Paynter.  He was under-bidder on the G1 Haskell Invitational winner in 2010.

On Monday evening, Keeneland sold 75 select yearlings for $30.29 million at an average of $403,867 and a median of $350,000.  There are no comparable figures for 2011 as Keeneland changed the September Sale format this year, opening with one select session rather than two select sessions as per last year.

“It was a good horse sale,” Keeneland vice-president Walt Robertson claimed.  “Average and median were up, and the clearance rate was within two points of last year.  Our buyers literally came from everywhere.”

The September Sale runs through to Friday, September 21 and is streamed live at:  www.keeneland.com 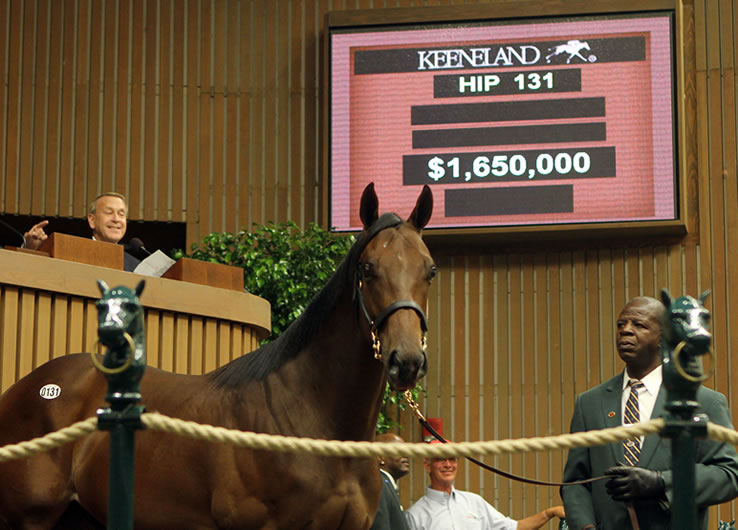