Kiwi raider Ocean Park is challenging for Cox Plate favouritism after an authoritative victory in the G1 Underwood Stakes at Caulfield on Saturday.

Ocean Park (4h Thorn Park – Sayyida by Zabeel) ranged up to Voila Ici at the furlong and responded under Glen Boss to defeat the Italian import by a half-length.  ‘”He’s certainly the real deal,’” Boss said.  “He’s got everything.  He can sprint quickly and at the same time take a position.  He’s a genuine Cox Plate horse.”

Bookmakers promoted Ocean Park from $16 to the second line of Cox Plate betting at $6.  Unbeaten colt Pierro is the $5 favourite for the Moonee Valley grand final on October 27.

Trainer Gary Hennessy will give Ocean Park a final Cox Plate hit-out in the G1 Caulfield Stakes on October 6.  “It’s exciting to come over here and win a Group 1,” the Matamata trained explained.  “He’s got a great turn of foot and is pretty special.”

Ocean Park (NZ) is raced by Hong Kong residents Andrew Wong and Steve Yan.  ”I send a lot of horses up to Hong Kong,” Hennessy said.  “But I recommended this bloke stay here and he hasn’t let us down.”

After winning the G3 Wellington Stakes at Trentham in January, Ocean Park travelled to Sydney and looked very unlucky when runner-up to Laser Hawk in the G1 Rosehill Guineas.  He returned this season for an eye-catching victory in the G1 Makfi Challenge at Hastings before grabbing another Group 1 at Caulfield.

His half-sister by Iffraaj realised a sales-topping $290,000 at the 2011 Karaka Select yearling sale.  The filly is on the books with Roger James and has been named Lady Sayyida.  Their dam Sayyida has a Pins colt that’s been nominated for the 2013 Inglis Easter yearling sale and she has been bred back to Thorn Park this season. 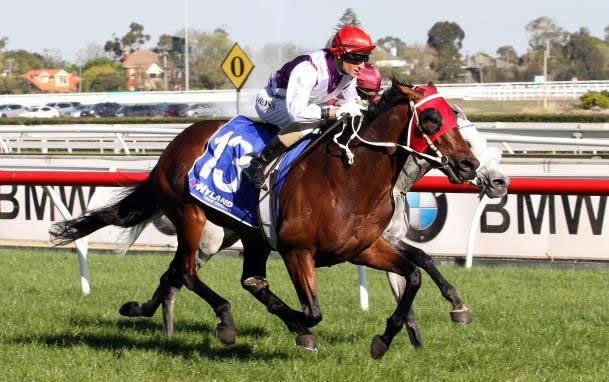