Mr Quickie can complete a Group 1 double on Saturday when he jumps a popular pick in the South Australian Derby (2500m). Back in February, Pilkington rated his yearling half-brother by Nostradamus a bargain buy for $125,000 at the NZB Karaka Sale.

Dashoff was sold in foal to I Am Invincible for a partnership that will send her to Aquis Farm’s first-season sire Lean Mean Machine at Nagambie in Victoria. The Nostradamus colt was purchased for Mangalore Park proprietor Steve Hinchliffe and will be trained by Barry and Reece Goodwin.

Winning Partner (Dawn Approach) can also play a hand in the LR Adelaide Guineas. The last-start Oakbank winner was a $110,000 graduate from the 2017 Adelaide Magic Millions. 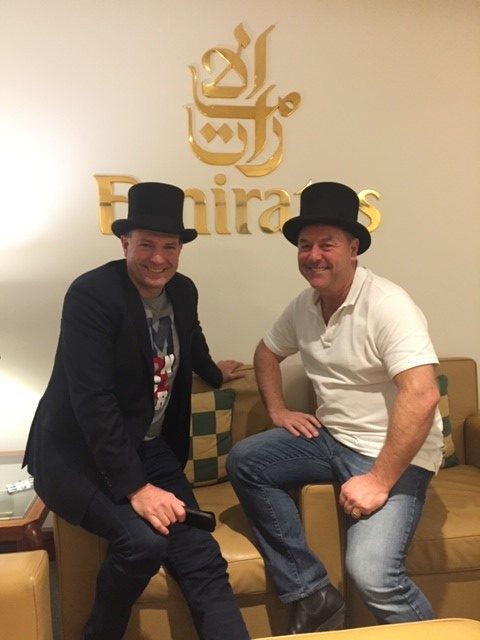 There’s more black-type on the boil at Morphettville next Saturday week with Lady of Crebilly poised for a hat-trick in the G3 Proud Miss Stakes at Morphettville. The Choisir mare cost a mere $7,500 at the 2016 Adelaide Magic Millions.

Last-start G2 Queen of the South Stakes runner-up Snogging (I Am Invincible) will attempt to go one better in the LR Centaurea Stakes. She was a $260,000 buy at the 2016 Inglis Melbourne Premier.

And on the same afternoon in Queensland, Luvaluva holds a Group 1 entry for the Doomben Cup. The Mastercraftsman mare will break through seven-figures if she salutes – a profitable mark-up on a $55,000 price-tag at 2016 Karaka 2YO Sale.

That’s pretty much par for the course for Pilkington (pictured in Top Hat & T-Shirt with Darren Thomas) who has been involved in the racing and breeding industries for more than 30 years, most notably as bloodstock advisor to David Hayes at Lindsay Park.

He had witnessed at first-hand the impact of financial challenges for owners and trainers and developed a solution through Horse Training Packages with his major client and partner Darren Thomas who is CEO of Australia’s largest meat processing company, Thomas Foods International.

Thomas races under the Seymour Bloodstock banner and their best horse to date has been Merchant Navy who cost $350,000 at the 2016 Inglis Easter Sale. The Fastnet Rock colt won the G1 Coolmore Stud Stakes at Flemington and G1 Diamond Jubilee Stakes at Royal Ascot which sealed a $27 million shuttle deal with Coolmore.

“Pilko does a great job with the bloodstock portfolio,” Thomas said. “He’s really producing the results. I’m a born trader and we buy and sell quite a few.”

They also secured dual G2 Rubiton Stakes winner Super Cash (Written Cash) and she is booked to The Autumn Sun at Arrowfield Stud.

Another astute purchase by Fastnet Rock was Asgard Massif for $400,000 at the 2017 NZB 2YO Sale. Raced by Singapore-based surgeon Dr Tan Kai Chah, he is back on the market after a last-start victory at Sandown.

Bam’s On Fire and Ginger Jones hail from Pilkington’s old stomping ground in Perth. “Bam’s On Fire looked a very promising 2yo and Brian McGuire, who was working for Ciaran Maher, negotiated the sale for us earlier this season,” Pilkington said. “She won by five lengths at Benalla last month and is nominated for Caulfield this Saturday.

“Ginger Jones won at Ballarat under Dwayne Dunn last month and he’s a brother to Group 1 mare Silent Sedition. We purchased their dam Fiorentina for $850,000 at last year’s Magic Millions National Sale. She foaled a filly by Fastnet Rock and is due to him again in October.

“We bought Fiorentina from Korilya Stud owner Ellie Giles and she reminded me the last time Dwayne won on a Korilya-bred was Cash in the Bank at Ascot way back in 1995.”

Besides sourcing winners galore, Pilkington has written a song and produced a video for Merchant Navy ahead of his second book at Coolmore Stud. Click here to see if you think Pilko should give up his day job and get into the music business.