Dion Luciani is a dab hand at winning early-season 2yo races and he’s homing in on a hat-trick of Initial Plates (1000m) come October 10 at Ascot.

The stable won the Initial Plate with Amarillo Rose (Slater) in 2018 and Bumper Humper (Alfred Nobel) in 2019.  Last year’s 2yo team also included All American fillies Too Spicy and Our Danni who saluted at Ascot in October – November.

American Choice added an unprecedented third Ascot win for All American before Christmas.  She was educated by Luciani before transferring to Simon Miller

Luciani won the first 2yo barrier trial for the babies this season with Tiny’N’Tuff (Bradbury’s Luck) at Lark Hill on September 7.  She was placed in her second hit-out there on Monday and so was stablemate Green And Shady who was the first 2yo seen in public by Geisel Park sire Vert De Grece (Ire).

“I’ve been very happy with how they’re coming along and the signs have been especially good with Vert De Grece,” Luciani reported this week.  “His progeny have the right attitude.  They want to be racehorses.

“We’ve had a bit of success in the early 2yo races and that helps me draw a line – year by year – when comparing how the next crop is shaping up.”

Green And Shady (2g Vert De Grece – Darkling by Encosta De Lago) looked a jump-and-run type when sprinting to the lead in a 400m hit-out at Lark Hill earlier this week.  He was overhauled by a smart War Chant filly named Champagne Dame and was then eased down for the final 100m.

“He has a beautiful action and went straight for Mitchell (Pateman),” Luciani said.  “He’s pulled up shinny so will go out for a break but I have some others ready to step up.”

Luciani mentioned Another Fish among the next batch coming through the system for Vert De Grece.  She’s a half-sister to Little Fish (Patronize) who nailed a picket-fence for Andrew Inglis and Peter Fernie in Kalgoorlie before adding four more in town last year.

The Vert De Grece 2yo colt from Bourbon Dynasty (Trade Fair) is another forward youngster.  His dam is a half-sister to this year’s Belmont Oaks – Belmont Classic winner Chantrea (Puissance De Lune).

Vert De Grece (Verglas) was a Group 1 winner of the Criterium International as a 2yo at Saint-Cloud.  He stands for $4,400 service fee at Geisel Park alongside All American (Red Ransom) at $6,600. All fees (inc GST).

PHOTO: The latest Vert De Grece foals on the ground at Geisel Park include this colt out of Romida (Vain Rancher) for breeder Garry Delane.  His dam was a 2yo winner at Ascot and was runner-up to Waratah’s Secret in a LR Belgravia Stakes. 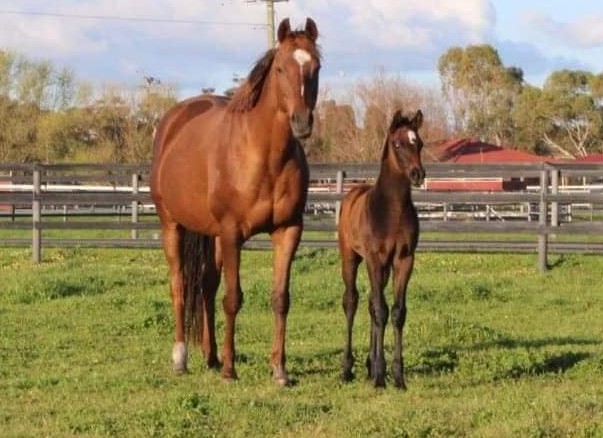