“Her pedigree is enormous and with that black-type, the world’s her oyster,” Miller declared.  “She is worth a fortune!”

Ocean Jewel was the first Stakes winner for Waikato Stud sire Ocean Park and her dam Markisa (Danehill) is a three-quarter sister to Danewin and Commands from the famed family of Eight Carat.

WA owner Mark Chadwick had purchased Ocean Jewel for $80,000 as a foal from Newgate Farm at the 2015 Inglis Easter Weanling Sale.  When she finished racing, he sold her privately to Gilgai Farm’s Rick Jamieson through agent Damon Gabbedy for a reported $1 million.

That was an astronomical mark-up but Jamieson got his money straight back when Ocean Jewel’s first foal by I Am Invincible made $1 million at the Magic Millions National Weanling Sale on Thursday.

He was purchased by Melbourne trainer Ciaron Maher who has prepared Gilgai Farm graduates like multiple Group 1 winning mare Jameka.  “He was an absolute stand out – from a good mare and by the right stallion,” Maher said.  “We were hoping he wouldn’t go that high but with the yearling prices this year going up and up we thought it was a good opportunity.”

Mark Chadwick was born and bred in WA but spent 15 years in corporate finance in Indonesia, China and Singapore.  His first winner back home with Miller was Fuld’s Bet in the G3 Gimcrack Stakes.  She was favourite for the 2014 Karrakatta Plate but was a late scratching after being cast in her box on race eve.

Fuld’s Bet is a first-crop daughter of I Am Invincible and Chadwick has her current 2yo Tibetan Heights (Dissident) with David Vandyke in Queensland.  Mark and his wife Patricia also bred a Not A Single Doubt – Fuld’s Bet filly last August. 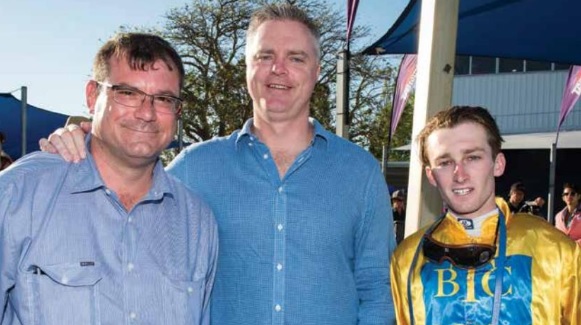