Magnetic made every post a winner with a front-running, four-length victory in the R&C Paving Maiden Plate (1300m) at Cranbourne on Friday evening.

The lightly-raced son of Press Statement had been runner-up over shorter trips at his first two starts before stepping up to 1300m for trainers Leon & Troy Corstens.  “I was happy to take it up when nothing else wanted to lead,” winning jockey Lachie King said.  “There was a fast lane on the fence and he travelled beautifully.  It was game over on the turn.  He kicked and broke their hearts.”

Team Corstens rep Jasmine Coleman revealed Magnetic isn’t a fancy trackworker and the stable left tactics up to Lachie.  “We were wondering whether he could improve after missing the start in his first two races,” she said.  “He was positive and went to the next gear tonight.  And there’s plenty of scope for him to keep developing.”

Press Statement sired another progressive first-time winner earlier on Friday when Cartography broke through in the A Nod And A Smile Maiden Hcp (1300m) at Taree.  Like Magnetic, he was stretching out to 1300m at his third start for trainer Kris Lees.

Vinery sire Press Statement landed his first Stakes winner with Equation in the Canberra Guineas LR last week and there could be a second on the horizon in New Zealand.

Equation had won three of his first four starts before the black-type caps and Kiwi filly Hold The Press has a similar strike-rate heading into Wellington Guineas Gr.2 at Trentham next Saturday.

Hold The Press (3f Press Statement – Asset Rain by Encosta De Lago) is owned by Aspen Bloodstock’s Graham Cossar and is trained at Otaki by Johnno Benner and his partner Hollie Wynyard.  She was a $35,000 buy from Baramul Stud at the 2019 Magic Millions National Yearling Sale.

“Hold The Press pleased us in a gallop with our Group 1 winner Bonham here at Otaki last Wednesday,” Benner said.  “They went over 1000m on a genuine slow track and it was good sharp workout.”

Benner and Wynyard have won three of the past six editions of the Wellington Guineas with Vespa (2015), Scott Base (2018) and Gold Bracelet (2020). 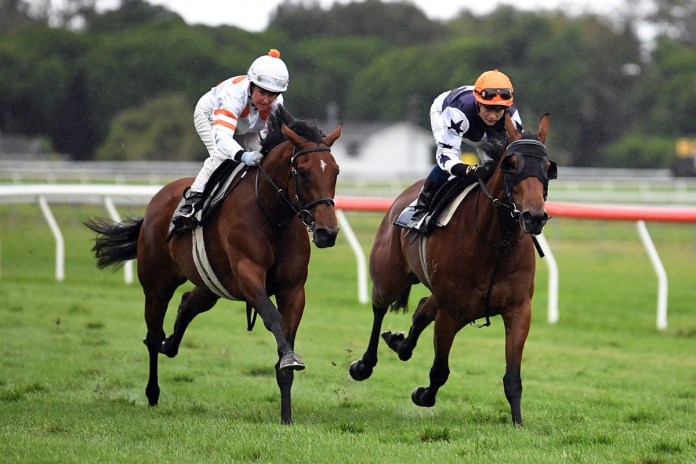 Hold The Press (right) gallops with Bonham at Otaki