Master Of Zerprise came from last at the half-mile to score a promising win for owner-breeder John McAlister at Murray Bridge on Wednesday.

Having just his fourth start, the 3yo son of Master Of Design looked a solid stayer in the making when getting the better of even-money favourite Cleary Adonis in the DAB / SABOIS Maiden Plate (1600m).

“The plan was to get on the back of the favourite because I knew he would take me into the race,” jockey Jake Toeroek said. “But he dropped the bit when they quickened at the top of the straight and that cost him an extra three lengths. It probably took him a furlong to figure it out before coming home nicely.

“He’s a progressive type and will get 2000m plus next prep.”

Master Of Zerprise is trained by Mick Huxtable and was coming off an encouraging third at Morphettville on Melbourne Cup day. He also appreciated a return to his home track and was backed accordingly into $4.80.

Huxtable prepared his dam Zerprisal (Zerpour) to two wins in Adelaide for McAlister and she has now foaled a half-dozen winners at stud. He’s also a three-quarter brother to Master Of Design mare Tessie who has won two races to date for Star Thoroughbreds in Tasmania.

Master Of Design (Redoute’s Choice) stands at Greta West Stud for a $3,300 service fee. There have been 80 individual winners of 185 races from his first four crops at a 56% strike-rate.

His Hong Kong expat Lakeshore Eagle saluted for the third time in six starts at Sha Tin on Saturday. Despite being hampered at the 400m pole, he kept on strongly and was driven out to score by a neck in the Panasonic Hcp (1400m).

Lakeshore Eagle was bred by Tony Stevens and John Cappellin for trial wins at Pakenham and Cranbourne before transferring to trainer Chris So. 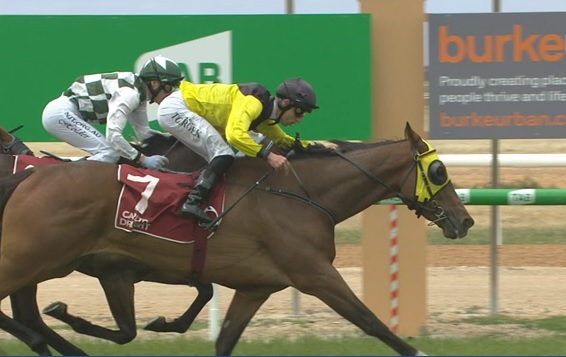