Vinery sires have 11 lots catalogued for the NZB Ready to Run 2YO Sale next week and among the highlights are its first-season sires Press Statement and Headwater.

“The Press Statement is an out-and-out athlete and did it easily in his breeze-up,” Beatson said referring to a 10.86s gallop.  “He’s a natural and wants to be a racehorse.”

His dam Karata is a winning daughter of Australian Horse of the Year Let’s Elope (NZ) and Pinhook Bloodstock’s Dave Mee bought him (as agent) for $165,000 at the Inglis Melbourne Premier in March.

“He’s a big, tough, free-flowing colt with a great page,” Mee said at Oaklands.  “He’s more of a winter 2yo – just like his sire.  The Press Statements are impressive types with plenty of bone and scope.”

Riversley Park’s Headwater – Red Duchez gelding was a $45,000 pinhook from the Inglis Classic Sale in February and has the precocity inherent on both sides of his pedigree.

He clocked 10.30s which was the fastest of 181 breeze-ups at Te Rapa last month.

“He’s a speed machine and hasn’t put a foot wrong,” Beatson confirmed.  “He has a lovely attitude and is seriously fast.  On what I’ve seen so far, he will be at the races early.”

Headwater is a speed-on-speed sire combining Group 1 winners Exceed and Excel (Newmarket Hcp) over River Dove (Oakleigh Plate) and Red Duchez descends from Mother Duck (Luskin Star) who was arguably the fastest mare out of the gates in Sydney during the 1980s.

Beatson has developed an admirable reputation for educating and preparing young horses for public auction like Holy Mongolemperor, a More Than Ready colt he sold for $240,000 at last year’s NZB 2YO Sale.

Holy Mongolemperor is trained by Murray Baker and Andrew Forsman for the Inner Mongolia Rider Horse Club.  He was an $8 second favourite for last week’s NZ 2000 Guineas Gr.1 but a minor leg infection meant connections had to up stumps on his classic campaign.

“He will come back with a view to summer and autumn targets,” Baker said.  “He’s a lovely colt and we look forward to his next campaign.”

More Than Ready has two entries for the NZB 2YO Sale starting with Lot 75, the colt from Warwick Farm juvenile winner Mineko (Fastnet Rock) being prepped by Eion Kemp at Kilgravin Lodge in Matamata.

“I bought him from Vinery for $80,000 and he’s a real goer,” Kemp reported this week.  “He was a bit of a handful during inspections before the Inglis Classic Sale but has furnished into a cracking individual and has obviously got plenty of ability.”

More Than Ready’s colt from Miss Portofino (Flying Spur) has been catalogued as Lot 81 by Prima Park’s Kelly Van Dyk.  He’s a half-brother to South African-based Anjaal who was Group 1 placed in the Premier’s Champion Stakes at Greyville.

“He’s beautifully-balanced and looks a readymade 2yo,” Van Dyk said.  “He’s a big, good-looking colt and will eventually get over ground.”

There could be another Group 1 addition to the pedigree through close relation Spring Heat.  The More Than Ready mare won first-up at Ellerslie on Melbourne Cup day and is being set for the Railway Stakes Gr.1 in January. 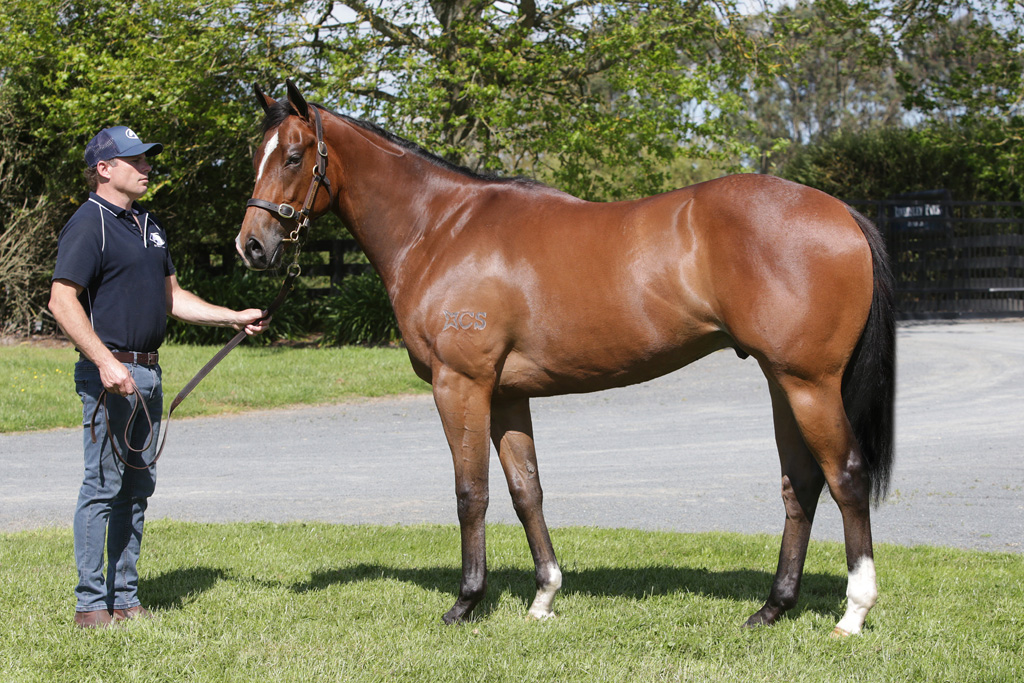