Mileva has maintained her near-flawless first-up record with a last-stride victory in the $200,000 Sir John Monash Stakes (Gr.3, 1100m) at Caulfield.

The Headwater mare settled on the fence and presented with a perfectly-timed run in the straight to defeat Bless Her by a short-head in Saturday’s feature weight-for-age sprint.  “That’s very satisfying,” trainer Phillip Stokes said.  “She spelled well and Daniel Moor gave her a lovely ride.

“She has matured and strengthened up a bit and was quite forward after two jump-outs.  She spends most of her time at our farm working up the hill track and swimming in the pool.

“We thought it best to get up for the early spring races and then see where that takes us.  We might have a throw at the stumps in the Bletchingly although 1200m is a question mark.”

Mileva has only been beaten once in five starts when resuming and she also won the Manihi Stakes (LR, 1050m) second-up in March last year.  That was her first black-type victory and she followed up at Listed level in the Alinghi Stakes (1100m) at Caulfield and Kensington Stakes (1000m) at Flemington.

Mileva was bred and sold by Little Hills Pastoral owners Geoff and Christine Tucker for $42,000 at the 2019 Adelaide Magic Millions.  Initially raced by owner-trainers Dan Clarken and Oopie MacGillivray, she changed hands this time last year when they accepted an offer from South Australian breeder Michael Birchall.

Her career card now stands at 15 starts for 7 wins and 3 placings for prizemoney totalling $543,635.  The Tuckers sent her dam Lady Einstein (Magic Albert) back to Vinery where she was covered by Headwater last September.

Headwater (Exceed And Excel) has started the last month of the season with a spate of winners and another four arrived on Saturday:  Mileva, Be Water My Friend & Goldsborough (Doomben) and Fragore (Darwin).

Hoof-note:  Headwater 3yo Inundation came undone in rain-affected going at Caulfield on Saturday.  After completing an effortless hat-trick last month, the Price-Kent Racing galloper dropped out of contention to finish fifth in the Neds Hcp (1100m).

“He didn’t handle the track but he’s done a super job this preparation,” stable spokesman Ben Elam said.  “With a little bit of time off, he will definitely be an even nicer horse next season.” 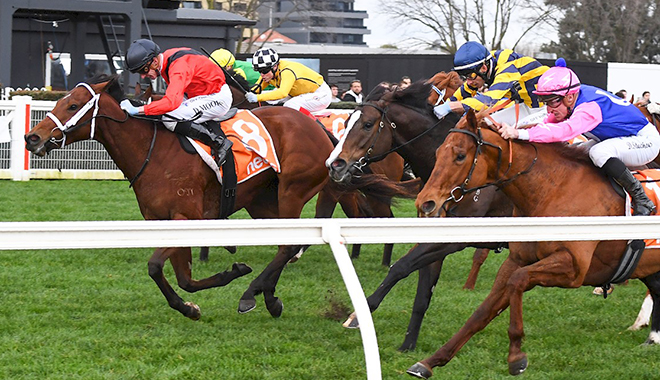