Luke Fernie backed his judgement when nominating Miss Frost for stakes company at Ascot on Saturday and it paid off with a value-added victory in the LR Jungle Mist Classic (1200m).

It was a black-type first for Miss Frost and for Fernie who is a rising star of Perth’s training ranks.

The filly’s owners Ron Sayers and David Reed also have jockey Mitch Pateman to thank for a superb ride after he trimmed down to 55kg.  “I’ve always known she had the ability but she’s been unlucky,” Fernie said.  “I told Mr Sayers and Mr Reed she was a nice horse and they backed me in.

“I left it up to Mitch from the wide barrier and it was a peach of a ride to settle one-one.  I knew it was all over then.”

Miss Frost boosted her residual value with the Listed level victory.  She is by former shuttler Frost Giant (USA) and is the final foal of Belmont winner Mega Me (Danewin).  Her second-dam Party Time (Bletchingly) won a G3 Angus Armanasco Stakes at Caulfield.

Sayers bred her at Yarradale Stud and stayed in the filly after Reed purchased her as a yearling for $20,000.  Her overall record stands at 13 starts for 4 wins and earnings of $147,745.

“She has been storming home and I was lucky enough to follow Brad (Parnham) and get in,” Pateman revealed.  “I spent a long time in the spa this morning to make the weight .  It hurt but it’s all worthwhile now.”

Frost Giant (Giant’s Causeway) shuttled to Yarradale Stud for two southern books from his base in New York.  Those two WA-bred crops include 37 individual winners at a 61% strike-rate and they have accumulated $3 million in prizemoney. 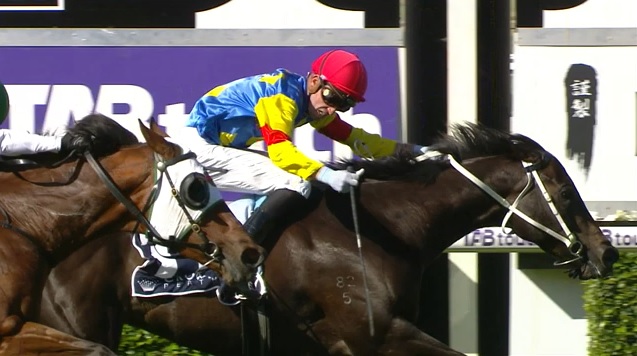